A little gift from God for Rosa and us 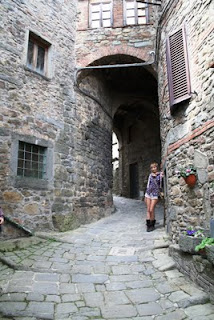 Tuesday, April 26
Fascinating, providential, serendipitous—these words all describe one of the events of the day. First must come a background story, though.

Several years ago, while doing research on the family by using ellisisland.org and ancestry.com, I found the names of thirty or forty Spadonis from Ponte Buggianese and surrounding areas who came to the United States from 1900 to 1920. Most went to Chicago, but some to San Francisco, Minnesota and, of course, Washington state. One I noted in particular because, although he went to Chicago in 1911, his draft registration card says he was living on S. Washington Street in Tacoma in 1917. His occupation was listed as car repairman for Northern Pacific Railroad. Both the ship’s record of his crossing and his draft card say he had a wife, Orsola, still living in Ponte Buggianese.

I have always been curious about this mysterious Guido, wondering if my nonno Michele knew him. Michele’s father was born in Ponte Buggianese, and Michele was born about three miles away in Pescia. Tacoma and Gig Harbor are right across from each other on Puget Sound, and Michele worked at the Asarco smelter in Tacoma (technically it was in Ruston, but Ruston is pretty much surrounded by Tacoma). It is extremely likely that Guido and Michele were related, although they may not have known exactly how because of the long Spadoni history in Ponte Buggianese. Anyway, right after 1917, Guido disappeared from the records, and I have always wondered what happened to him. 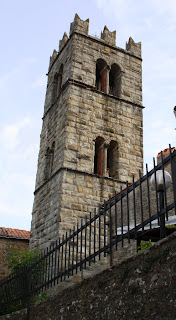 Now we are back to today. Lucy is cooking in preparation for tomorrow’s rinfresco, but the rest of us take advantage of the fact that we have a rental car and can travel to places inaccessible by train or bike. I use Google maps to find a little city in the hills about 20 minutes above Pescia. It becomes our destination on a drive up a rough, winding and narrow road through a scenic valley covered with green grass, olive trees and multi-colored wild flowers. Of course there are also ancient stone farm houses and arching bridges and terraced gardens.

We arrive in San Quirico and walk around for forty-five minutes, admiring the view of the surrounding hillsides and the winding, narrow and hilly streets. It is a community with only a centro storico; there are no new buildings on the outskirts. The houses, though ancient, are well maintained, and pots of fragrant flowers abound in the streets and courtyards. Just before we are ready to leave, Randall notices a door sign that reads: Dinelli Avio e Spadoni Rosa. I snap a photo and we are about to move on, but Lela has seen a man coming out the door. She greets him with a “Ciao,” and says there are some Spadonis here, motioning toward us. He comes to the gate, and I explain that we are italo-americani and are interested in the sign because we share the same name. I ask for his name, but unfortunately it doesn’t stay with me, only that his surname is Dinelli but he is also part Spadoni.

He immediately invites us in to meet his mother, Rosa Spadoni. We learn that Rosa will turn 100 years old this October, and her husband is no longer living. Her son, the man who has invited us in, grew up here, but he has been in Germany for the last forty years or so. He comes down often to see his mother, especially around the holidays, but apparently Rosa lives alone when her son is not visiting. He explains to Rosa that we are Spadonis and that we are looking for possible relatives. What is her father’s name? Guido, she says. And her mother’s name was Orsola. Guido and his brother Attilio went to America when Rosa was young, but during World War 1, they returned. Guido lived the rest of his life in Italy, but Attilio went to Argentina and the family does not know what became of him. 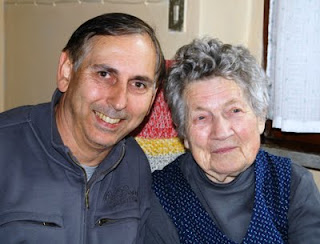 Suddenly I remember. This is the Guido who was in Tacoma in 1917 and worked for the railroad. “Did your father go to Chicago and then Tacoma?” I ask. Yes, she thinks he went to Chicago and then somewhere else, but he was concerned he would have to fight in the war, so he and his brother returned to Italy. I explain that I have seen records of her father when he was in America, and he was practically in the same city as my nonno. I also tell her my great grandfather was born in the same city as her father, so it is likely that we are distant relatives, though neither of us can go back far enough in the records to prove this conclusively. After fifteen minutes of conversation and some coffee, we are content to go home, but it is obvious that everyone has enjoyed this chance encounter.

As we walk to the car, we can’t help but be impressed by the incredible sequence of events that had to occur for us to meet this super-distant cousin. I picked a city out to visit at random. We walked down the right street, and Randall just happened to glance at the name on the gate. We came by at the exact moment that Rosa’s son came out the door, but only Lela saw him. Thankfully, Lela hung back and said something, because the rest of us were already walking away. And then we find that this is not just any Spadoni, but one who has ties both to Ponte Buggianese and also the state of Washington, and it is a family about which I have some information. I feel as if God has indulged me in my hobby of family research by leading me to Rosa and her son, a little gift to brighten up my day, and I think He has brightened up Rosa’s day as well.

*******************
Postscript: While going through the parish archives in 2014, I found out how I was related to Rosa. We had a common ancestor Lorenzo Spadoni, born in 1723 and married to Caterina Mariani. Rosa descended from their son Francesco, and my family came from another son, Leonardo. Counting down through the generations, that would have made Guido and Michele, both in Tacoma in 1917, third cousins. My dad would have been a fourth cousin to Rosa, so she is my fourth cousin once removed. 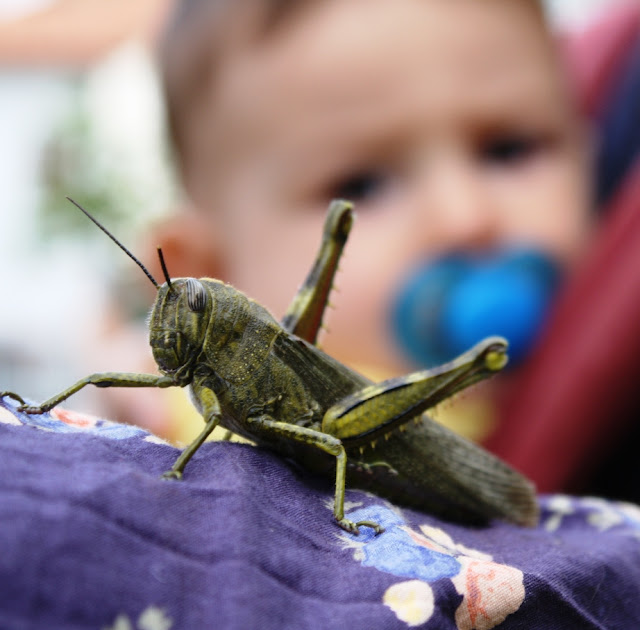 Suzye finds a very large grasshopper and uses it to entertain us all, Micah included.

Posted by Paul and Lucy Spadoni at 2:24 PM