Reading about the tragic events of Italy’s involvement in World War 2 has always both saddened and intrigued me. The country suffered so intensely from the arrogance of one power-crazy man who plunged it totally unprepared into the wrong side of a vicious conflict. Mussolini joined the Germans in 1940 because he thought they would win, and he hoped to get in line when the spoils of war were divided. He is reported as saying to his chief-of-staff: “I only need a few thousand dead so that I can sit at the peace conference as a man who has fought.”

My cousin Mario Seghieri, 88, joined the Italian army at age 19, just before Italy tried to quit the war, and he and his wife Loretta Forassiepi have agreed to talk to me about what life was like in the Montecarlo area during the war. I have taken some liberties in quoting them, because they speak only Italian, and their words are translated by Elena Benevenuti, but I have done my best to accurately represent what is reported to me.

“I was in the infantry, in La Spezia,” he said. “There were 300 to 400 men in our battalion, and we were living in tents, ready for war, waiting for instructions.”

This would have been the summer of 1943. But while Mario waited for his first action, other battles were being fought in the political arena. The Italian Grand Council, fed up with Mussolini, stripped his powers as prime minister in July, arrested him and gave control of the army to King Vittorio Emmanuele III. Italy then started secret negotiations to change alliances, and on September 8, 1943, Italy officially quit the war, and then on October 13 declared war on Germany.

Mass confusion ensued. The Germans broke Mussolini out of prison and set him up in a puppet leadership role in the north of Italy. In La Spezia, Mario and his fellow soldiers were waiting orders to repel the British and American invasion from the south, but they suddenly found themselves enemies of their German counterparts. The Germans, who controlled the region, told the Italian soldiers to put down their weapons and submit themselves to arrest.

Mario’s Italian commanding officers told their soldiers to put down their weapons, but they also told them to get themselves out of there subito. Go home as fast as you can, they said. Mario took a train to Monsummano, where he hid out in the attic of a cousin for two months before daring to come home to San Salvatore.

“It was safer in the country,” he said. “If I went into Montecatini, I would be captured as a prisoner of war.”

Mario did make his way back to San Salvatore, but he and the other men had to keep themselves out of view when the German soldiers would come to collect food for their troops. The soldiers took eggs, chickens, wine and anything else edible, and they compelled the women to repair their clothing. Ivo Seghieri told me last year that his father would keep sour wine in the front of the storage shed so he would have something to give to the Germans. Loretta, who was only 11 when Italy switched sides, remembers the Austrian soldiers being gentler than the Germans, who “followed orders without feelings.”


With the Germans occupying Italy, none of the men except the very oldest were safe. Mario remembers that the Germans would often come early in the morning, hoping to surprise the men in bed and capture them as prisoners of war.

“We children were the lookouts,” Loretta said, “We would alert the adults by calling for Maria. When they heard us shout that name, they would hide themselves.”

Mario and about 20 other men had to hide silently in the attic of Casone Marcucci (the actual name of what Lucy and I call the Seghieri house). There was a secret passageway into the attic, covered by a wardrobe. Once the Germans searched the house, including the upper bedroom, but they didn’t look behind the wardrobe.

Some of the locals tried to disrupt German operations, and a German soldier was killed in Montecarlo, but this brought swift retribution. The German policy was to kill 10 civilians for every soldier killed, and on the wall in Montecarlo’s main piazza are listed names of soldiers and civilians killed in  World War 2. Among  the 15 civilians put to death is Faustino Cappochi, probably a relative of my great grandmother Ines. No members of the Seghieri family died in this war, but a nearby World War 1 memorial shows two Seghieris who gave their lives.

“The Germans were very angry,” Elena explained. Italian men were subjected to forced labor, digging trenches to establish the Arno River Line and then “la Linea Gotica,” the famous Gothic Line. “The German soldiers thought the Italians were cowards, that they had betrayed Germany by going back on their word to fight with Germany.”

When the American and British soldiers started advancing through Italy from the South, the Germans established lines of defense known as the Arno River Line and the Gothic Line. These defensive lines extended almost straight across the center of Italy, from west to east. Right smack in the middle of these two lines were the cities of Lucca and the smaller nearby cities such as Altopascio, Pescia, Montecatini and Pistoia, crucial outposts in the most important of Germany’s last stands. These cities, especially the train stations, were heavily bombed by the allies in an effort to cut off German supply lines. Mario vividly recalls the sounds of the American bombers with four engines flying right overhead, with some bombs falling only 500 meters from his house. 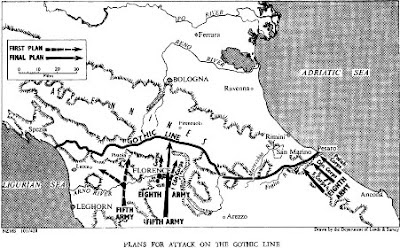 American bombs set a large tank of gas on fire, and it spread throughout the woods near San Salvatore. Loretta was living in nearby Fornace at the time, but when that area became the headquarters for German troops, her family fled. There was a large forno in Marginone, about a miles from where we sit in Mario and Loretta’s home, that the Italians used to make bricks, but the Germans appropriated it to bake bread for their troops. The Americans sent out spies to find the location of the forno, and then they targeted it with bombs.

“We made ditches to hide ourselves and protect ourselves from the bombs,” Loretta said. “They bombed Chiesina, too (Chiesina Uzzanese, about a mile from here in the opposite direction). “We had to live inside these big ditches, not just us, but people coming from the cities that were being bombed, like Livorno. Those of us who were young didn't realize how much danger we were surrounded by.

“We were starving. We had almost nothing to eat. During the German occupation and then the bombing, we hadn't been able to plant our fields. No one was working because we were afraid for our lives.”

After the fall of Rome in June of 1944, the Nazis retreated to the Gothic Line, which historians describe as a heavily fortified belt some 16 kilometers deep and the site of the biggest and most crucial battle fought during the Italian campaign. When it was finally breached in late August, it marked a significant turning point in the war, and it meant the fighting was over around Montecarlo.

Mario and Loretta remember the American soldiers bringing food to the community, especially chocolate. The final allied victory in Italy did not come until the spring offensive of 1945. The official Italian independence celebration is April 25. Mussolini was captured and killed by partisans in the small village of Giulino di Mezzegra in Northern Italy while attempting to flee April 28, and life slowly returned to normal.
------------------------------------------
For more interviews with Mario and Loretta, read:
Memories of Fascist rule unpleasant for Mario Seghieri and family
Mario Seghieri recalls his youth while still going strong after 91 years

Posted by Paul and Lucy Spadoni at 2:15 PM