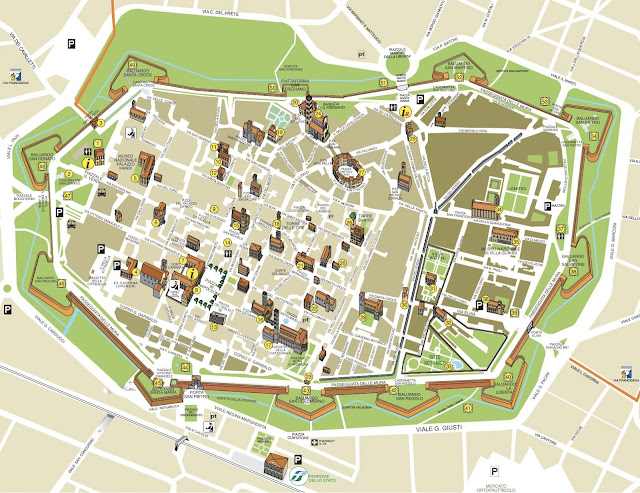 Anybody who has visited Lucca has immediately noticed its massive outer walls, made of brick, stone and dirt. While fiefdoms on all sides of Lucca were yielding to foreign aggressors before, during and after Renaissance times, Lucca maintained its freedom and independence through these turbulent years without actually having to defend itself, for the simple reason that opposing armies realized that these walls would be nearly impossible to breach. The Lucchesi made the task of breaking through the walls more difficult by installing eleven baluardi, projecting parts of a fortification built at an angle to the line of a wall, so as to allow defensive fire in several directions, and known in English as bastions.


In building these fortifications, they could well have been following the advice of renowned political adviser Niccolò Machiavelli, who wrote in 1512: “Who fortifies his town well . . . and looks after his subjects, will never be attacked without great hesitation, for men are always adverse to enterprises where difficulties are obvious, and it will be clear it is not to be an easy thing to attack one who has his town well-fortified.”

Yesterday Lucy and I heard the story of the walls of Lucca, told by one of the city’s premier tour guides, Elena Benvenuti. Even better, we were able to go inside two of the three baluardi which have recently been reopened for public viewing, San Paolino and Santa Croce. The tunnels and inner rooms are now well lit to permit visitors to visualize how the spaces could have been used to store ammunition and fire guns and cannons at invaders. This was the first time the tour has been offered, and it was entirely in Italian, so we missed many of the details. However, in the months to come, Elena hopes to repeat the tour many times and include a version for speakers of English.

Elena explained that the original city walls were built by the Romans in the second century before Christ, but when the city expanded in size, new walls were built outside the Roman walls. The first expansion was built between 1000 and 1100, and a further extension was added between 1380 and 1420.

The Renaissance walls that currently surround the city are the result of the last campaign of reconstruction, launched in 1503 and completed a century and a half later, in 1650. They were built even further from the center, so that they enclose remnants of both the Roman and medieval walls—which can still be seen today, if one knows where to look.

These outer walls are the second largest example in Europe of walls built according to modern principles to have survived completely intact in a big city. The outer walls of Lucca are 4.195 kilometers long, and Elena explained how the city elders, fearful of outside aggressors, required every male citizen ages eighteen to fifty to contribute time or money for the city’s fortification. It is likely that women and children also aided in the construction by providing food and other support, in addition to sometimes working alongside the men.


To read about the special joys of going on top of the wall, click here.
More information about Elena and her tours can be found on Discover Lucca with Elena.