Among the grim and gruesome stories told in the aftermath of the massacre of civilians in the Padule di Fucecchio, a few encouraging instances of compassion did occur.

Silvano Cipollini, who was 10 years old during the slaughter, was fortunate to be living in a house with his grandfather, aunts and uncles and a handful of other displaced persons. A bomb had struck his own house, forcing the family to move into a neighbor’s home, Casa Simoni. In early August, two German officers appeared and asked to be hosted in the house as well.

“My nonno, who was the head of our family, could not refuse—and that was our salvation,” Cipollini related in an interview in Orizzonti di Lamporecchio, published in 2013. “I remember these two officials were always looking out the window with their binoculars, and they would give orders to the soldiers to scour the area to the left or to the right, searching for partisans that were not there.”

After 20 days of this, the German officers warned the Italian inhabitants of the house on the evening of August 22 to hide themselves well the next morning. “I remember these words,” Cipollini said, “They said, ‘Tomorrow everyone in the house. If not, KAPUT!’ ” 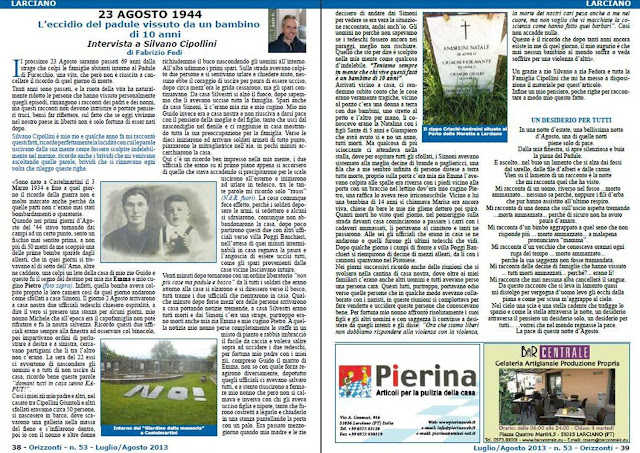 Using a boat and a huge pile of hay, the Italians fashioned a tunnel to hide in and then closed up the entrance.

“At dawn, we heard the first shots,” Cipollini said. “The Germans shot two people on the street, and we heard the victims cry out and ask for help, but none of us had the courage to leave the hiding place for fear of being killed. After about a half an hour, the shouts stopped, but the shots continued.”

During the seven or more hours that the Italians remained in hiding, Germans soldiers were often both outside and inside the house, but the two officers did not give them away.

“Fear and anguish reigned during those interminable minutes,” Cipollini said. “We worried that the bullets shot into surrounding houses would penetrate our hiding place.”

They also had to listen to soldiers reporting on the execution of civilians at other houses, places where they knew that other family members were living. At one such report, Cipollini’s grandfather became so enraged that he grabbed his hunting rifle and tried to force his way out to seek revenge on the Germans. He was restrained by the others, who reminded him that the two officers who were protecting them were among those outside.

Shortly after noon, noting that the shooting has ceased several hours before, Cipollini and the others exited and witnessed the aftermath of the massacre. Dead bodies were in and around every other house. The German officers, whose names he does not know, left around 6 p.m. “Those were the last Germans I saw,” he said, because Allied soldiers soon advanced into the area and the Germans retreated.


In another part of the Padule, inhabitants at Casa Silvestri had been slaughtered indiscriminately. Soldiers entered and ordered the inhabitants outside and told them to stand in a line. Those who ran were shot before they could escape. Alberto Pratolini was just over a year and a half old, and his mother Bruna clutched him tightly and followed the soldiers’ orders. By chance, Bruna and Alberto lined up on the left side of the door, while the others lined up on the right. The soldiers opened fire, but Bruna and Alberto were miraculously spared, perhaps because they were covered by a German who had unknowingly planted himself in front of them. Among those killed was Alberto's two-year-old friend, Antonio, who survived the gunshots but crawled out from under his dead mother and cried loudly. A soldier dispatched him with a hard blow to the head with a rifle butt.

When the soldiers left, Bruna went in the house and rendered aid to those inside who were wounded but still alive. In an account published by the ProLoco Carmignano, author Barbara Prosperi relates that the survivors made their way to a home occupied by German soldiers and, remarkably, Bruna charged in and hurled herself at them, shouting, “Assassins!” She demanded to know why they had so ferociously attacked defenseless civilians. One of them coldly replied: “Partisans kaput Germans, German kaput partisans.” Bruna, out of her mind with anguish, pointed at the children and women who had survived with her and shouted, “Are these the partisans?” In the heat of the moment, she grabbed the man and began to shake him, tearing his shirt.

Prospero writes: “Faced with that reaction, the soldier hesitated, and the woman promptly seized that moment to beg for mercy for the people who had remained alive: ‘Save us, please, save us!’ she begged him, continuing to hold Alberto against her chest. The military man said, ‘I am good ... I Austrian. But if my officer orders me to kill you, I must do it; otherwise he will kill me.’ However, the Austrian soldier conferred with three other men and led the desperate survivors to a rear exit. He pointed them to a path that led to the farmhouse of Baroness Banchieri, considered a safe zone because the German command was based there.

“In the midst of so much cruelty, that soldier stood out for a compassionate gesture that saved the life not only of Bruna and her loved ones but of several other people who, following the young woman’s lead, were rescued, transferred to the farm and thus made definitively safe.”

Earlier that morning, the kindness of another soldier had saved Bruna’s 13-year-old brother Bruno, who had been sent into the Padule on horseback to carry food to Bruna’s husband and other men who were hiding deeper in the swamp. Unaware that a slaughter was taking place, Bruno encountered a German patrol. By a stroke of good fortune, the commander knew Bruno and his family, and he warned the boy to turn around. When Bruno hesitated, the officer raced up to the horse and, looking at Bruno with haunted eyes, shouted at him to go home and not be seen again, kicking the beast to cause it to run.

In 1947, Bruna offered her testimony at the trials of German soldiers in Padova and Firenze. She died in 2015 at age 101. Alberto became a bank manager and was 74 years old when he told his story to Prosperi in 2017.

Despite his tender age during the slaughter, Alberto still has haunting memories. “I remember exactly the point at which we met with my brother Alfredo. I still see him running towards us along the road that led from the Silvestri farmhouse to the Banchieri farm. As soon as we were reunited, I told him: ‘Tato Edo ... anto 'anghe ... tutti 'otti,’ (brother Alfredo, Antonio bloody, everyone broken) a sign that despite my 20 months, I had understood very well what had happened.

“Then I was left with a fear of uniforms. Alfredo at the age of eighteen made his entrance to the Military Academy of Modena. Every time he came home with his outfit, it was a torment to me. Even today it is enough for me to see a simple traffic policeman to feel a feeling of unease.”

Another act of both compassion and wisdom came from the unlikely source of Silvano Cipollini’s grandfather—the same man who in his rage had wanted to rush out and kill the German soldiers with his hunting rifle. Cipollini explained that some of the local Italians had collaborated with the Nazis, and Cipollini’s uncles and friends wanted to avenge themselves on the traitors once the Germans had left.

“Fortunately, my grandfather confronted his sons and the others with wisdom and resolutely convinced them to desist,” Cipollini said. “He told them, ‘Now that we are free, we must not respond with violence to violence. The death of our dear ones weighs heavily on my heart as well, but I don’t want you to stain your consciences as have those barbarians.’ ”

Go back to the beginning of the series
Posted by Paul and Lucy Spadoni at 11:47 AM