My grandparents left Italy in 1909—and it was a good thing they did. Nonno had found a reasonably well-paying job in the United States, and they avoided much of suffering that their Italian relatives endured during two world wars. Nonno undoubtedly would have been forced to fight in World War I, and my dad and uncles would have been conscripted into the Italian army in the second war. 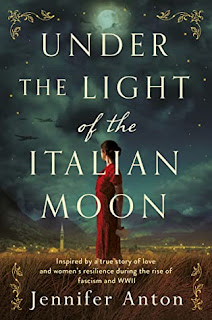 I feel great sympathy for the poverty and hardships that Italians endured during the first half of the 20th century, and I’m fascinated with the struggles and conflicts that were precipitated by the rise and fall of Benito Mussolini and his fascist cronies. This interest has compelled me to read several books about this period, so I recently jumped at the chance to be an advance reader for Jennifer Anton, who will soon release a book based on her great-grandmother’s experiences in Italy from around 1914 to 1948.

The book is titled Under the Light of the Italian Moon, and I was fortunate enough to receive a free advance copy in exchange for offering my comments and suggestions. The book will be available for purchase at Amazon March 14, 2021, and you can even pre-order the e-book here.

The part of the tale that touched me the most, however, was not about the war but about the love story between her great grandparents. Pietro Pante left Italy in 1914 to work in the mines of Pennsylvania. He returned to Italy in 1919 to ask Nina Argenta for her hand in marriage. She had caught his eye five years before, and he couldn’t get her out of his mind. She felt the same way, but neither of them expressed their feelings for each other at the time, and then Pietro was gone.

The reason this is so personally compelling is that it closely parallels the story of Michele Spadoni and Anita Seghieri, my own grandparents. Michele left Montecarlo, Italy, in 1903, working in a steel mill, for a railway company and then in a brick factory. Having made some money and with a promise of continued employment at the brick factory, he returned to Montecarlo. Within a few months, he and Anita had married. We have no record of how this romance developed, but reading the conversations between Pietro and Nina in Anton’s book sparked my imagination. Michele and Anita could have shared the same words as they pondered the future.

At one of the first meetings between Pietro and Nina after he returned for a visit, they begin to carefully discuss the future, even though neither one had expressed feelings for the other. Here are some details and dialog from Anton’s manuscript:

Nina studied Pietro as he talked about America and looked over the expanse of Fonzaso, his breath coming out in puffs as it met the air. His face held a determined look.

“My family here leads a simple and difficult life,” he answered. “They’re born; they work to survive by toiling in the fields and depend on the weather. If I live here, I worry my children and my children’s children will lead the same life. Sometimes I think rather than earning money and bringing it back to live better here, as my father wants, I should settle there for good.”

“What’s wrong with leading a simple life?” asked Nina. She was challenging him but, in her heart, she knew what he meant.

Pietro stopped and smiled at her. “Nothing. It’s not bad if you don’t mind going hungry for half the year. I do find it repetitive and a constant struggle. Maybe less for you and your family because of your mother being a midwife, but certainly for someone like me. Remember, I’m one of fourteen. I want something special for my children, and I’d like to raise them in America where there’s a chance for them to do something extraordinary instead of working in a field until they die.

“And what about you, Ninetta? What do you want?”

She noticed he added the endearment to her name.

She regarded him cautiously. “I know I want a family of my own.”

He turned to look at her.

She wished he would come closer, keep her warm, instead of standing at a distance observing her answers.

“Is that all you want?” He pressed.

“When my brother left for America, it broke my mother’s heart. I promised her I wouldn’t leave her. I want to keep my promise. I don’t want to leave Fonzaso. Not now.” She hesitated. “But to be honest, during the war, I dreamed about taking a ship across the ocean. I wondered about America. Perhaps someday an adventure will be in store for me.”

As the plot continues, they gradually become closer, and their mutual affection grows with deeper conversations. I wish I could time travel and ask Nonno and Nonna about their romance or jump back even farther to eavesdrop on their courtship. But since this is impossible, reading the dialog between Pietro and Nina will have to do. It warmed my heart and brought tears to my eyes.