Our new church home: the Chiesa Evangelica Valdese in Lucca 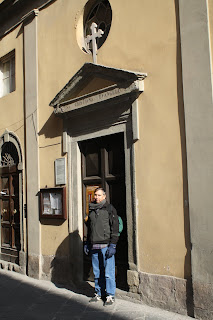 Sunday, February 13
Where to go to church? Though I grew up as a Catholic, I made a personal commitment to God when I was 17, and since then I have preferred churches that emphasize personal prayer and Bible reading--overall a more personal relationship with God. Since then I have attended mostly independent protestant churches. Lucy’s experience has been similar. That being said, we gave serious thought to attending the local Catholic Church here, partly for the convenience of not having to take a train, and partly to become more a part of the local community. However, considering that we want to continue coming here for many years, we felt we needed to find a community where we could worship and learn in a way that met our spiritual needs instead of attending for social or convenience reasons.

So off we go today on the train to one of only two protestant churches we are able to locate in the entire Lucca area, the Chiesa Evangelica Valdese, or in English, Waldensian Evangelical Church. We found this church on the Internet and were interested to see that although it is classified as a protestant church, it actually predates the Protestant Reformation of Martin Luther. It has existed for around 1000 years, centering mostly in Northern Italy and Southern France.

The Sunday service reminds us very much of the traditional American mainline protestant services that Lucy and I attended 35 years ago at Rosedale Union Church. We sing traditional hymns from bound hymnals, some Bible passages are read, and then comes a sermon and communion. About 40 people of mixed ages attend today. We arrive about ten minutes before the service starts, and several men come up to introduce themselves, as does the pastor, Domenico Maselli. Given our limited language abilities, we can say little beyond that we are Americans who will be living here for three months, but we are made to feel welcome. After the service, we meet a few more people, including Domenico’s wife, Jole, who gives us her phone number in case she can be of any help. I estimate that I recognize maybe a quarter of the words of the sermon, not enough to really understand, but by knowing what Bible verses il pastore is teaching from, we can get a general idea. He also speaks slowly and clearly, unlike the TV news programs we sometimes try to watch, where the announcers speak hopelessly rapidamente. It will be interesting to see how much we'll be able to understand in a couple of months.

One inconvenience of living in a little town is the lack of regular train service. The trains go through our town quite often, but only some of them stop. We can not catch a train from Lucca to San Salvatore until 3:40 p.m., though we find trains that leave for Pescia at 12:30 and 1:30 p.m. We stop at a bookstore in Lucca and Lucy buys some cookbooks, and then we take the 1:30 to Pescia, which passes San Salvatore without stopping. We shop at the EsseLunga for 45 minutes and then take a 2:52 from Pescia that goes back to San Salvatore, arriving only four minutes later at 2:56. As we make the ten-minute bike ride home, we experience our first rainstorm in two weeks. We had bought new raincoats in the U.S. before coming here, but we have been lulled into a sense of false security because it never seems to rain. Now we arrive home cold and damp, but it was not a heavy downpour, so it could have been much worse. We vow that we will be ready next time.

UPDATE: After attending this church for about five years, we found another Protestant church much closer to Montecarlo and San Salvatore. Now we go the Chiesa Evangelica di Altopascio: http://livingwithabroadintuscany.blogspot.it/2017/03/we-have-stumbled-across-our-church-home.html

Posted by Paul and Lucy Spadoni at 1:25 PM