American girl in Italy a statement of freedom, not harassment, says subject

That famous photo of Italian men gazing longingly at an American woman that I referred to in my previous blog post? It is supposed to be more about strong, independent women than it is about love-crazed Italian men, according to the photographer and the woman in the photo. A few years ago, Laura T. Coffey of Today News tracked down the woman in the picture and asked how she felt about the scene. 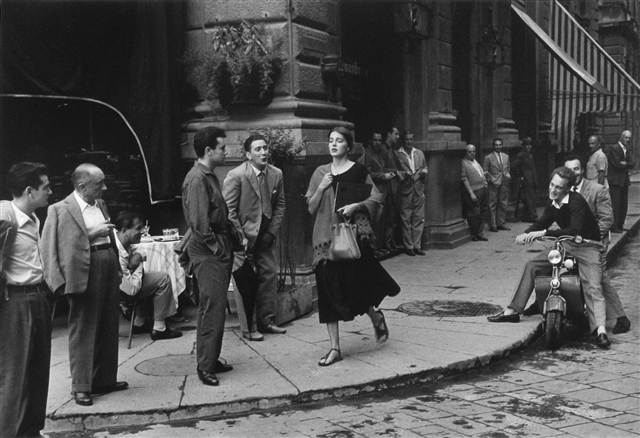 Ninalee Craig, who was 23 at the time of the photo, said she did not feel bothered by the men at all. “It’s not a symbol of harassment,” she told Coffey. “It’s a symbol of a woman having an absolutely wonderful time!”

Craig, who passed away in May of 2018, had traveled on her own for six months through Spain, Italy and France, an unusual venture at the time for a single woman. The striking 6-foot beauty turned a lot of heads. In Florence, she met photographer Ruth Orkin, who was also traveling alone.

“We talked about traveling alone and asked each other, ‘Are you having a hard time? Are you ever bothered?’ We both found that we were having a wonderful time, and only some things were a little difficult.”

Together they developed the idea of having Craig wander around Florence while Orkin shot photos to show what it was like for a single woman on her own in Europe. Coffey writes that for two hours, Orkin photographed Craig “admiring statues, asking for directions, haggling at markets and flirting in cafes.” Orkin captured her famous “American Girl in Italy” photograph during those two hours of “horsing around,” Craig said.

She said the photo is a celebration of strong, independent women who aren’t afraid to live life. “Men who see the picture always ask me: Was I frightened? Did I need to be protected? Was I upset?” Craig said. “They always have a manly concern for me. Women, on the other hand, look at that picture, and the ones who have become my friends will laugh and say, ‘Isn’t it wonderful? Aren’t the Italians wonderful? They make you feel appreciated!’”

She acknowledged the men in the photo appear to be leering and lascivious, but she insisted they were harmless. “Very few of those men had jobs,” Craig said. “Italy was recovering from the war and had really been devastated by it . . . I can tell you that it wasn’t the intent of any man there to harass me.”

Posted by Paul and Lucy Spadoni at 7:12 AM