The Tower of Spadoni has been restored to its former splendor

How could I have lived in San Salvatore for four winters and not known there was a 50-foot tall Torre degli Spadoni only 12 miles away? I first heard about it last summer from Alessandro Bondi in a Facebook group called “Spadoni in the World.” He posted a photo of it that included its approximate location in Capannori, and yesterday Lucy and I drove there to take some photos. 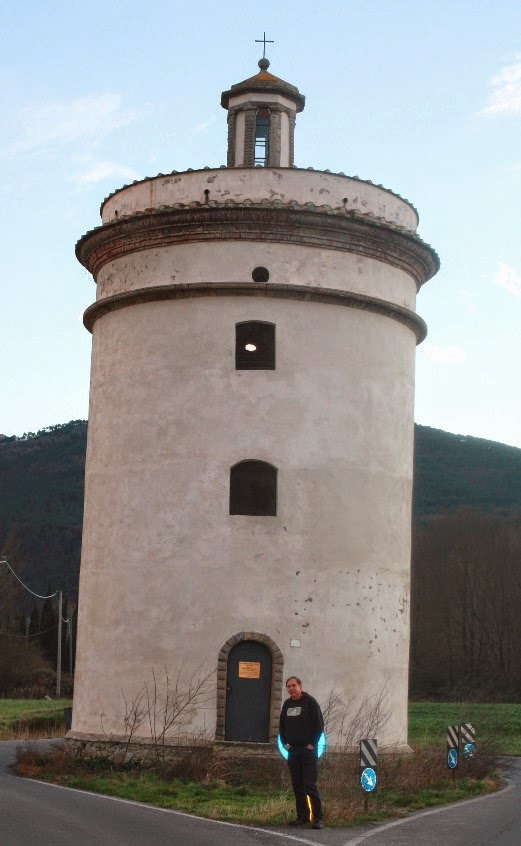 This discovery raises many questions about the history of the Spadoni family in the Lucca area. A newly installed sign on the door says the tower dates from 1500. This is after the date that the earliest known ancestor in our family line—Bartolomeo—was born in the 1400s. But he came from Marliana, which is about 20 miles to the northeast. Of course, some of the most important questions may never be answered: How did the tower get its name, and how long ago? Was it tied to a Spadoni family from the 1500s, or did the name come from a Spadoni family who owned the property more recently? I will try to find out, but I am not optimistic that I have the resources to discover this on my own, and perhaps there are no records available at all.


The research is made even more difficult by the fact that the tower is known by several different names. I have found articles online that call it Torre degli Spadoni, Torre dello Spada or Torre di San Donnini. It is located about four miles southeast of Lucca in a swampy area between the little communities of Parezzana and Massa Macinaia. It can be viewed from above by typing in the address via dello Spada, 4, Capannori, Lucca, on Google maps. Some articles stated that the building was likely a watchtower to guard against encroachment of the Florentine army against the gates of Lucca, which are only four miles away.

When I first started my research, I met with some discouraging news. The tower was leaning and in disrepair. Here is a translation of an article I found in Il Tirreno, by Arianna Bottari, dated Nov. 20, 2010:

The state of maintenance of the Tower of Spadoni in the Marshes of Moscheni continues to worsen. The small circular building that is located in the middle of the marsh is now in the hands of vandals and is in absolute neglect. Despite the many cries of alarm launched by insiders (in the case of the president of Italy Nostra Lucca, the architect Roberto Mannocci), but also by ordinary citizens, the tower remains on the back burner.


Overgrown with weeds (there’s even a fig tree growing in the middle of the roof tiles), battered by vandals who have covered it with graffiti, with doors that are going to give in, there are those who predict the collapse, seemingly with total indifference. Thus, only two months ago, after yet another cry of alarm, Mannocci explained the reasons for such carelessness: “The building is a typical element of the landscape and should have a better fate. The problem is that it can't be used for particular initiatives or activities, nor can it be transformed as the seat of associations or similar activities. This means that a restoration would be just a cost on those who undertake it, but without benefits, except for having saved an asset of great value in terms of landscape and architecture.”

Giving voice to the concerns of citizens and experts in history and local architecture is councilor UDC Gaetano Ceccarelli, who said, “The conditions in which the tower is heading are nothing short of shameful. The state of neglect has reached embarrassing levels. We believe the council should be interested in the problem and, if necessary, promote the recovery of a structure of great value from a historical and architectural perspective.”

I found several other similar and sad articles, and knowing how slow the wheels of government can be in Italy, the future did not look promising for our tower. But as I continued to search for more information, I found some awesome and surprising news: In June of 2013, the comune of Capannori hired a construction company to repair the tower. The tower was enclosed in a protective cage in October, and by November, the work was complete. The plants growing from the tower have been removed, the grafitti was covered with new plaster, the stones at the top were cleaned and a coat of white paint was added. 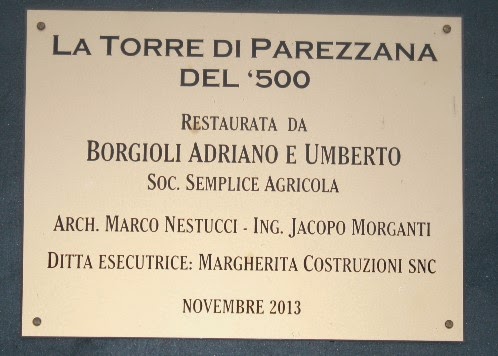 As pleased as I was to see the renewed tower in person, I did suffer a disappointment. A plaque on door of the building calls it the Torre of Parezzana, based on its location. None of the stories I had read used that name, and I fear that its historical names will someday be forgotten. It wouldn’t have take much more space to add the other names, and I hope that a more detailed history of the tower can be added in the future, one which includes the traditional names.
Posted by Paul and Lucy Spadoni at 5:59 AM