New language blunders to add to my collection of amusing stories

Sometimes the Italian teenagers we meet here are shy about trying out their halting English skills, even though most of them study English several times a week. I’m sure they’re afraid to make a brutta figura by mispronouncing words or using bad grammar, a fear I completely understand but have, for the most part, overcome. It is essential for us to communicate somehow, even if only badly. Learning to laugh at oneself is an important life skill!

I recently had an article published in Fra Noi, a Chicago-based magazine for Italian Americans, about humorous blunders I’ve made or been told about. Several of the stories came from our missionary friends Steve and Patti Gray, and when I thanked them for their help, they told me two anecdotes that I hadn’t heard before that are worth passing on.

Both were made by their friend and co-worker Terry Paretti. On one occasion, he was introducing a visiting pastor who had come from Germany, and he repeatedly used the phrase pastore tedesco, which means German pastor. However, pastore means shepherd, even though it can also refer to the leader of a church flock, a pastor. Grammatically, it was correct, but because of the famous breed of dog, a German pastor should be referred to as “un pastore dalla Germania,” a pastor from Germany. Terry’s reference elicited polite smiles from his Italian-speaking audience each time he referred to the wonderful dog who would soon be addressing the people.

The other instance also involves a famous German, Martin Luther, who was the topic of one of Terry’s sermons. In Italian, Luther’s name is Lutero. However, the accent should be on the second syllable instead of the first, but Terry didn’t know that, so he repeatedly mispronounced the name. This wouldn’t have been worth mentioning, except that there is another almost identical word, l’utero, with an accent on the first syllable. Utero is uterus, so he gave a sermon on Martin the Uterus.

The Fra Noi article is not available for viewing online without a subscription, but I will scan in the pages so you can at least see the fine artwork done by my niece Gina (Spadoni) Lillie. Most of the stories in the article I’ve already published in these two earlier blog entries, and it may be easier to read them there:
Language blunders embarrassing but, from distance of time, amusing
More amusing language blunders 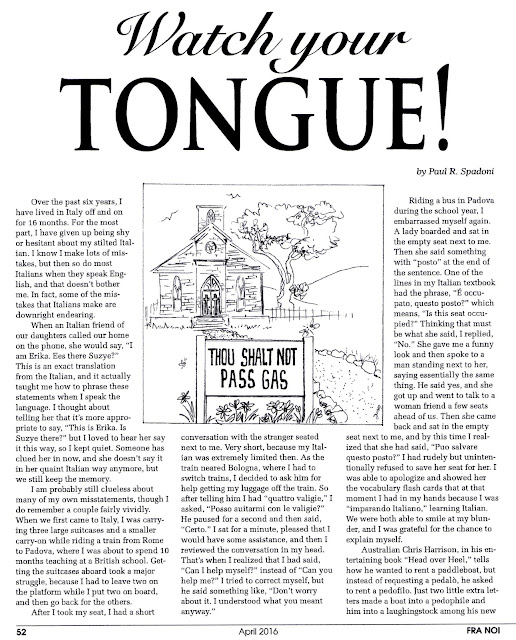 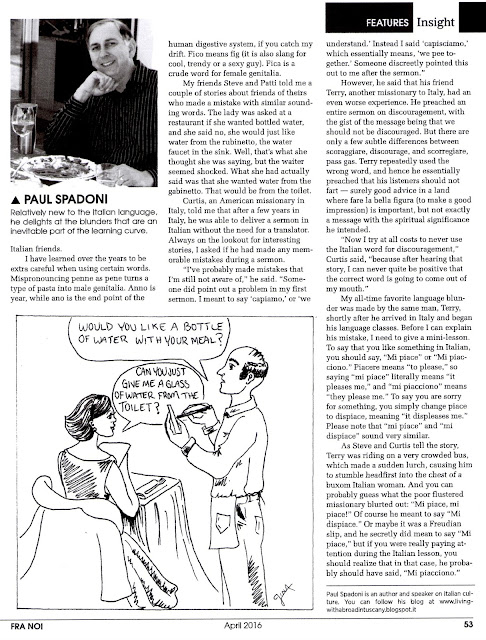 Posted by Paul and Lucy Spadoni at 5:35 AM