Inside the marvelous Firenze Duomo 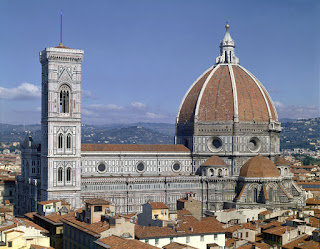 I don’t want to sound like a philistine, but I have nearly had my fill of fabulous art and majestic churches, so yesterday I sat in a piazza and people-watched while Lucy toured the Medici library here in Firenze. Today, though, we see something that never ceases to interest and amaze me—a towering building constructed of stone, marble and brick that would stagger the imagination of any architect, engineer or carpenter—really anyone who likes to build things. It is the Duomo, formally called the Cattedrale Santa Maria del Fiore, and often referred to as the centerpiece of the city. 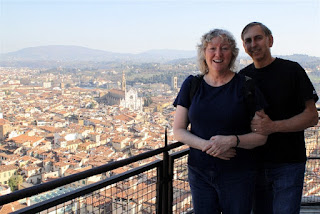 Like the pyramids of the Egyptians and the temples of the Greeks, this building amazes because it is so incredible to think it was constructed without modern cranes, excavators, drills, cables or any power equipment. At the time construction began in the 1200s, not even the planners of the time knew how to build the dome for what was then the world’s largest church. It is said they figured that by the time they finished everything else in the cathedral, someone would come along who could figure out how to make the dome. However, it sat uncovered for more than 100 years and became an embarrassment to the city because no one had the engineering expertise to complete a self-supporting structure of that weight and size.

The committee overseeing the cathedral eventually held a contest to see who could solve the riddle of completing the dome. Some favored the labor-intensive idea of filling the cathedral with dirt and building the dome on top of that. The dirt would be mixed with an occasion coin to encourage the public to assist in removing the dirt later. Another rejected idea was to use pumice to make the dome lighter.

Firenze native Filippo Brunelleschi had already lost out in a famous contest with Lorenzo Ghiberti to design the doors of the baptistery, but since then Brunelleschi had gone to Rome to study the buildings of the ancients.  Now he insisted that he could build the dome, but he refused to reveal how he would do it, fearful that the job would be given to someone else once they realized how to do it. Giorgio Vasari records that Brunelleschi became so agitated during several dome committee meetings that he had to be physically removed. He finally came to the committee with an egg and issued a challenge. He bet that he was the only one of all these learned experts who could make an egg stand up on a flat slab of marble without supports. When no one else could do it, Brunelleschi broke the bottom off the egg and it stood upright. Naturally the others protested that anyone could have done that, to which Brunelleschi replied that they would say the same thing if he told them how he planned to construct the dome. He got the job, and today I have a chance to see how he accomplished this amazing feat.

We pay 8 euro each and wait in a short line for the privilege of climbing the 463 steps to the top. Initially the stone stairs spiral upwards with right angles. They are wide and the passageway spacious; it seems the climb will not be difficult. Then the passageway becomes narrower and the spiraling becomes circular, but it is not long until we come out on a balcony inside the dome, where we can see the frescoes much better than we did when viewing from the bottom. Still, we see that within another hundred steps or so, we will be on a higher balcony, so we pause only briefly. Once on the higher balcony, we take a longer break to admire the artistry of Vasari’s frescoes of the last judgment, which fill the inside of the dome. We try to figure out what the various scenes represent. We can see that the lower level is the underworld, and the figures seem to have been designed to scare the hades out of anyone who sees them, with demons poking, cutting, eating and using flaming torches on the tortured souls. Above that is the earth, and angels are pointing to way to various higher levels. The top figures, the 24 elders of Revelation, are skillfully crafted to look three-dimensional.

Now we move higher and see the real genius of Brunelleschi’s design. He created two shells for the dome, an inner shell made of a lightweight material, and an outer shell of heavier wind-resistant materials, both shells thinning near the top. By creating two domes, Brunelleschi solved the problem of weight during construction because workers could sit atop the inner shell to build the outer shell of the dome. He left a hollow place between the two domes, which reduced the weight, and it also allows visitors like us to climb to the top between the shells.

As we climb higher, we are able to see some of the oak ribs that Brunelleschi used to support the inner dome. I later read an explanation on the web site Obscure.org: “To support the dome, Brunelleschi devised an ingenious ring and rib support from oak timbers. Although this type of support structure is common in modern engineering, his idea and understanding about the forces needed to sustain the dome was revolutionary. The rings hug both shells of the dome, and the supports run through them. Other than a few modifications to remove rotted wood, the supports still hold up the entire dome.”

The site also explains how he was able to get the bricks on the dome to stay up and not fall to the ground during the construction: “Once again, Brunelleschi had an ingenious idea that is common practice today, but revolutionary in its time. He created a herringbone pattern with the bricks that redirected the weight of the bricks outwards towards the dome’s supports, instead of downwards to the floor. By observing carefully the curve of the dome as it took shape, Brunelleschi was able to place these bricks in key areas.”

The last stretch of our trek is the steepest, as we climb stairs that go straight up the curve of the inner shell. Metal hand rails have been added to make this ascent more secure. Once out on the top deck, we enjoy some fabulous 360-degree views of Firenze and the surrounding hills. On the descent, we stop in a room that displays some of the tools that were devised for the dome construction. I have read that Brunellischi become an engineer as well as an architect in order to solve the many construction challenges that arose. He designed new winches, hoists and cranes to bring the materials up, and he had an eye toward the future when he built in storm drainage systems and iron hooks to support interior scaffolding that would be needed later to clean and restore the frescoes.

The dome has withstood weather, earthquakes and time to stand today much as it did upon completion some 600 years ago. The span is 143.5 feet across, still the world’s largest span for a masonry dome. For his achievements, Brunelleschi was accorded the honor of being the only person ever buried in the cathedral, under his ingenious and revolutionary dome. We are awarded tired legs and sore knees, which we gladly bear for the thrill of having been able to view this marvel up close.

Posted by Paul and Lucy Spadoni at 2:41 AM