“Absentee ownership never works. People assume you don’t want it anymore.” These are words of advice from Jeff Linstad, manufacturing engineer for Mutual Materials, who oversaw the demolition of Clay City.

The plant made its last brick in January of 1994, but it was not completely demolished until September of 2003, and during the ensuing years, it underwent a variety of interesting unauthorized uses.

“When we shut the plant down, we didn’t realize what people would do,” Mutual Materials President Gary Houlahan said. “We couldn’t afford to keep someone there for security, and some crazy things happened.”

Company personnel tried to secure the site by putting up signs and fences. Initially, they couldn’t close the Clay City Road because it was a dedicated county right of way, but Linstad hired a company to make a chain link fence to completely surround the plant the year it closed. “It cost us $24,000,” he said. “Thieves came in and took every last link of that fence.”

Then, Houlahan said, “Some enterprising fellows set up a meth lab in one of the buildings there. They weren’t particularly bright though, because hunters and a lot of people were still walking through that area, and somebody reported them to the police.”

According to an account in the August 21, 1996, Eatonville Dispatch, a nearby property owner had earlier confronted one of the young men who was wearing camouflage gear and holding a shotgun. The property owner told the man he shouldn’t be on the property, and when the intruder didn’t respond, the neighbor called the Pierce County Sheriff’s Office. Twenty officers showed up and found three men in the final stages of producing a batch of methamphetamine.

Around the same time, a former employee at the brickyard formulated rumors that the clay mines contained gold. He started an organization that advertised tours to this gold-rich land. Paying customers would dig up clay and take it down to the river to pan for gold. What they didn’t know is that the organizer  had sprinkled small amounts of gold dust in the bottom of the pans, enough to keep the customers interested but not enough to cut into the enterprise’s profits. Once Mutual Materials heard about the scheme, they forced it to shut down.

The meth lab and gold mine didn’t end the illicit activities at Clay City, though. The buildings were still mostly intact, and while the furniture had been removed by Mutual Materials, valuable items remained in the walls and machines for someone experienced in salvage operations.

“After that, a group of professional thieves came in and changed the lock on the gate,” Houlahan explained. “They would open it up during the day and steal everything of value—copper wire and copper from the radiators, especially, but also fixtures, doors, lumber—anything on the buildings they could tear apart and sell. They were operating on a regular 40-hour work week. During daylight hours, they’d drive their trucks in and go to work. At the end of the day, they’d lock the gate back up until the next morning. It was kind of funny, in a sad sort of way.”

Besides the professional thieves, there were also hunters and mischief makers who shot buildings to pieces.

“There had always been a shooting problem there,” Linstad said. “The plant managers would call and tell us that hunters were setting up salt licks within 100 feet of the plant to attract the deer for easy kills.” But the problem escalated after plant closure. “The school bus driver didn’t want to drive the bus past the gate because kids on the bus might be hit by stray bullets,” Linstad said.

“People shot their names in bullet holes in the roof of the clay shed,” Houlahan said. “They’d shoot at some areas repeatedly to try to make small holes bigger.” Some of the destruction was also done, apparently, by sledgehammers, with vandals breaking apart brick smoke stacks and pillars in expectation of watching them tumble down, though from photos Linstad took of the damage,  rebar usually  prevented brick walls from falling. 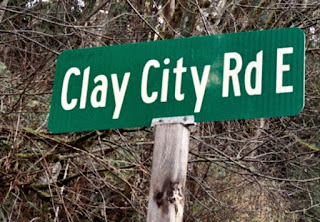 Having lived in Gig Harbor for most of my life, which has experienced at least a 10-fold increase in population in the past 100 years, it is strange to find a community that has gone from more than 150 people to wilderness in the same span of time.
Why did civilization disappear in Clay City? Gary Houlihan, president of Mutual Materials, has the answer. “We essentially ran out of high quality clay, and we shut the plant down in January of 1994.”  With the plant closed and the road barricaded, it seemed the story had ended, but in reality, action at Clay City was far from finished. In my next entry, I describe some of the interesting events that took place in the 19 years that have passed since the making of the last brick (Waning years of Clay City tumultuous).
Posted by Paul and Lucy Spadoni at 10:44 AM No comments: