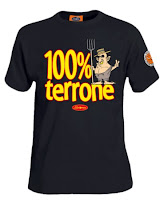 These terms are all unique to North American culture. However, Italians in Italy have their own disparaging nicknames for their fellow countrymen, representing dislike and prejudice between northerners and southerners. Southerners call those from the north Polentoni (polenta eaters), while people in the south are called Terroni (literally farmers or peasants—but somewhat like the American terms redneck or bumpkin). Similar to many nicknames and/or epithets, it is usually not offensive to be called a polentone or terrone by one’s friends from the same region—but the terms can be fighting words when used by outsiders or enemies. Context is the key, as it is for so many of these slang labels.
***
Where do "wop" and "dago" come from? Click here to find out.
Posted by Paul and Lucy Spadoni at 2:33 PM