Order up a bowl of that delicious Spadoni ice cream!

Finally our family has received the recognition it deserves for inventing one of the best types of ice cream ever. The young man who waited on our family recently at Spiro’s Restaurant in Gig Harbor, when asking if we wanted dessert, told us he could serve us Spadoni ice cream. We all broke out laughing at the poor guy, who probably wondered what was so hilarious.

I told him that we were all named Spadoni, and that our ancestors invented this ice cream, but the packaging people accidentally misspelled the name and called it Spumoni. I congratulated him and told him he was the first one to ever get the name right!

Of course that’s hogwash, but it’s what I’ve been telling friends for years to get a smile. And besides, most people with the surname Spadoni have probably been called Spumoni at some time by wise-cracking friends—so it’s only fair that we should claim some credit. In defense of the waiter, it was his first day on the job, and he had gone to school in the Harbor with Amanda Spadoni, one of our cousins, so he was more familiar with the name Spadoni than Spumoni.

Anyway, about spumoni ice cream, typically, it is of three flavors, sometimes with a fruit/nut layer between them. The ice cream layers are also occasionally mixed with whipped cream. Cherry, pistachio and either chocolate or vanilla are the typical flavors of the ice cream layers. The fruit/nut layer often contains cherry bits—causing the traditional red/pink, green and brown color combination. It has become more of an Italian-American thing than Italian. In fact, I’ve never actually seen it in my Italian travels, but I’ve read that it exists in Southern Italy and is rarely found north of Napoli. Speaking of Napoli, Neapolitan ice cream, with three flavors, is said to be a descendant of spumoni.

The website WiseGeek says: ‟Spumoni is a special Italian dessert made of layers of ice cream, whipped cream, candied fruit, and nuts. In Italy, it’s spelled spumone, but pronounced exactly as it is pronounced in English, with an accent on the last vowel. Each layer of the dessert contains different flavors and ingredients.” 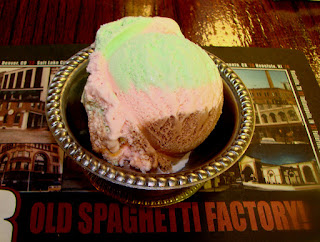 The name is derived from spuma, which means foam. Spumoni is popular in places with large Italian immigrant populations such as the United States, Canada and Argentina. The Spaghetti Factory serves it free with its dinners, which has done a lot to make it well known. August 21 is National Spumoni Day in the United States. November 13 is National Spumoni Day in Canada. I’m still not sure when they are going to name a National Spadoni Day, but it is long overdue!
Posted by Paul and Lucy Spadoni at 7:45 PM 3 comments: