I like coming to Tuscany to experience the culture, the people and the climate—and to challenge myself to adapt to a new environment. Tuscany and Languedoc, France, are only about 800 miles apart and roughly on the same latitude, so they have a number of characteristics in common. Thus it was with great interest that I picked up a copy of “A long way from Paris,” a memoir published last year by Gig Harbor author Elizabeth Corcoran Murray. In the early eighties, Elizabeth spent a half year in a remote part of Languedoc—and speaking of challenging oneself to adapt, she went from preppy high schooler to hippie college student to French goat herder all in a decade. The latter adventure is the topic of her book, and it’s a page-turner for anyone interested in immersing themselves in foreign lands and unusual occupations. 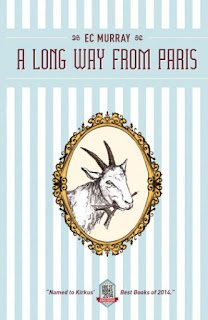 She went to France with uncertain goals and ambitions. In fact, she had no idea at the time what she wanted to do with her life, other than a strong but unfocused desire to be a writer. She bungled around Paris for a bit before going to visit a cousin in a mountainous, remote and rural area in the south. In a mix of naivety and desperation to find a purpose for her trip to France, she accepted a job as a farmhand, despite the fact that she had never been on a farm, spoke only a few words of French and suffered from an admitted lack of self-confidence.

She is refreshingly transparent about her insecurities, struggles, passions and growth. She gradually became more confident and self-assured while living a simple goat herder’s life, experiencing the hardships of a bitter winter looking after the animals and her adopted family. Her struggles to understand the language and the realities of mountain life will resonate with anyone who has ever been uprooted. She vividly and honestly expresses her roller-coaster ride of emotions and doubts, but she also describes the peace and stability that can be found in a simple life of hard work and fresh air while living close to the land.

Ms Murray writes simply, clearly and descriptively while keeping a proper focus on the narrative events that shaped her life both before and during her farming adventure. Not all of us have the freedom to plop ourselves down in a completely different culture, but at least we can experience it vicariously through her fine travel memoir.

Posted by Paul and Lucy Spadoni at 1:44 PM No comments: