Would you get diet advice from Dr. Glutton or buy badly cut upholstery? Some people do, apparently 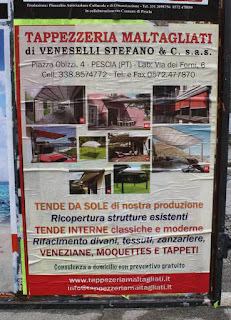 Often when I walk through the streets of Pescia, I note a poster that brings a smile to my face. It is for the Maltaglia Tappezzeria. Maltagliati is a family name that is quite common in the city; there are at least 30 people with this surname in Pescia and nearby communities. What makes me chuckle is that one of the Maltagliati families founded a tappezzeria, an upholstery shop. Why is that amusing? Because maltagliati literally means “badly cut,” so the store name is “Badly cut upholstery.”

I’ve noted before that Italy has more surnames than any other country. Not even China, with a population 22 times greater, or the United States, a melting pot of immigrants, has a greater variety. Italy is also famous for giving people nicknames, and in years past, when not everyone had a surname, nicknames sometimes morphed into official last names.

Another surname even more common in the Pescia area is Malfatti, which means badly made. One has to wonder, didn’t people originally assigned these surnames have some choice? Couldn’t they have refused it? However, Doctor Sergio Nelli, who works in the state archives in Lucca, once pointed out to me that the strange surnames could have originally been more honorable. Perhaps the first Malfatti could have earned that name for being a good judge of craftsmanship, famous for rejecting items that were poorly constructed. It is often stated that the head of the fiorentino Pazzi family was called Pazzo—crazy—for his courage in being the first man over the walls in the Siege of Jerusalem during the First Crusade in 1099. In the case of maltagliati, this word is also the name of a kind of pasta typical of the nearby Emilia-Romagna region. In making maltagliati, the excess parts of the dough, around the edges, are left with irregular shapes and thicknesses—thus the application of of the term “poorly cut.” The family name could have come from the pasta—or really any one of a number of other applications.

However they came about, Italian surnames still can be downright funny when one knows the meaning. One of the benefits of learning Italian is being able to understand and appreciate the roots of Italian names, especially when they are unusual or ironic. Seeing the Maltagliati Tappezzeria sign prompted me to see if I could find more ironic name and occupation combinations, and thanks to others who share this interest, I found several.

Sometimes the name perfectly fits the occupation, as with our cousin and friend Elena Benvenuti, the area’s premier guida turistica, tour guide. Her surname means “welcome.” There is also a travel agent south of Torino named for proprietress Iris Viaggi, whose name means travel. But these perfectly fitting names aren’t nearly as amusing as those which negate or exaggerate the occupation. One Italian blogger has found a number of these and even documented their veracity by listing the city and phone number of each. I will leave out some details for brevity but will provide necessary translations instead.

Emilia Guastadisegni is an architetto e pittrice, an architect and painter, but her surname means “spoiled designs.”

Doctor Girolamo delle Donne is an ostetrico, an obstetrician. Delle Donne means “of the women.”

Pietro Baccalà is a pescatore in Genova, a fisherman perhaps specializing in cod (baccalà).

There are two funeral directors in Rome with interesting names: Antonio Malattia and Giuseppe Mortale. Hopefully they are not partners, because mortale is “mortal,” malattia is “disease.”

And finally, here’s one where no translations are needed: Carmelo Erotico is the proprietor of the Sexy Shop in Bologna.

Posted by Paul and Lucy Spadoni at 2:10 PM 2 comments: