Dad knows everything . . . or nothing

My uncle Rudy liked to quote some folk wisdom—today’s Internet users would call it a meme—that he had heard repeated about how people view their fathers at various ages. One day he told it to my cousin Annette, and she not only wrote it down but had it set into calligraphy and framed.

She didn’t know where Rudy first heard it. Maybe his dad—our grandfather—told him, though it is also very likely he heard it later in life. The message is ageless; it probably could have been coined by any of Adam and Eve’s children. Mark Twain said something much like it, though he personalized it and made it more concise. He could have heard the concept in Italy, as he traveled there four times in four different decades. Twain worded it thusly: “When I was a boy of 14, my father was so ignorant I could hardly stand to have the old man around. But when I got to be 21, I was astonished at how much the old man had learned in seven years.”

The meme as Annette captured it from Rudy reads like this, with my translations added:
Cosa Pensano i Figli (What the sons and daughters think)
A 3 anni: Papá sa tutto (at age 3: Dad knows everything)
A 8 anni: Papá sa quasi tutto (Dad knows almost everything)
A 12 anni: Ci sono molte cose che Papá non sa (There are many things that Dad doesn’t know)
A 15 anni: Papá non sa niente (Dad doesn’t know anything)
A 20 anni: Domanderó consiglio a Papá (I’ll ask Dad’s advice)
A 40 anni: Se avvesí ancora Papá (If only Dad were still here)

Now I find that this Italian folk wisdom is being painted onto ceramics, printed on scrolls and made into placques for sale in tourist shops. It is rarely written the same way, as people adapt it to their own levels of maturity and cognition through their childhood, adolescence and then adulthood. Twain realized his dad’s wisdom at age 21; some people take longer.

In some versions, the 15-year-old still hasn’t realized that Dad doesn’t know everything. He doesn’t come to that realization until age 20, and then at age 30 he is only able to acknowledge that ‟Mio padre qualche volta ha ragione” (sometimes my dad is right). And then at 40, he says, ‟Ahh, se avvesí dato retta a mio padre” (if only I had listened to my dad).

I have to say, my own dad was exceptionally wise, so my own age of ignorance about him was short—though that didn’t stop me from doing stupid stuff as a teenager, things that I knew dad wouldn’t approve of. I never actually thought he was off base, but I wanted to do the stupid things anyway, so I just chose to ignore his wisdom. That’s a typical adolescent trait, and I think that deep inside, most adolescents who rage in frustration that their parents don’t know anything are aware that Dad and Mom have been around the block a few times.

Having raised four children of my own through their teen years, I’ve seen enough rolled eyes and exasperated expressions to be well able to relate to this cleverly worded folk wisdom. In the Italy of my grandparents, the father had nearly absolute authority, so it is somewhat ironic that this meme should have originated there. The Italian Dad was in charge, but it doesn’t mean his wisdom wasn’t called into question. And I wouldn’t be surprised to see many different expressions of this phenomenon expressed in many different languages, perhaps even starting in whatever language the children of Adam and Eve spoke.

Posted by Paul and Lucy Spadoni at 6:09 PM 3 comments:

My book, An American Family in Italy, will launch in less than one month 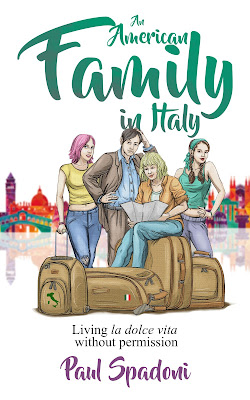 A long journey is about to end, and an exciting new one to begin. My first memoir about our explorations in Italy will be launched July 13, which is also Lucy and my wedding anniversary. It seemed like an easy date to remember!

It will be available as both an ebook and a print book on Amazon. I had hoped that by now my asphalt maintenance business would have been sold so I’d have more time to promote the book. I’ve had some conversations with prospective business buyers, but no sale yet. I thought about delaying the book launch, but it’s nearly complete and I’m getting impatient.

I could really use help from my friends and readers, though. I need about 30 people to join my book launch team. You won’t need to attend any meetings, and you’ll have a chance to get a nice discount on the book, plus get a second book completely free—all for just a few minutes of help.

You can contact me or sign up to help on this page, which also has more information about the book: http://ourlifeintuscany.com/book-info.html


Posted by Paul and Lucy Spadoni at 10:31 PM No comments: