About two years ago, I accidentally discovered the true Italian name of what our Italian-American family has always called Easter cake: It is zuppa inglese, which in Italy is often served only once a year around Easter time, or for some families, at Christmas. I had the privilege of sampling true zuppa inglese emiliana at the home of Stefano and Nancy Mammi (Read: It’s the real thing: I find the true Easter cake made from an ancient recipe). This sumptuous recipe has been passed down in the Mammi family for more than 200 years, so it is safe to say I enjoyed the real thing.


However, my family always loved my mom’s Americanized version, so I’d like to share her recipe. It is much easier to make than the original Italian dessert, because the ingredients are readily available and don’t take as long to prepare, so I am calling it zuppa inglese americana. I looked at about 20 recipes online in both Italian and English, and each one was different, so I realized that there is no one correct version. I don’t have Mom’s recipe written down, so I am going by memory, and thus it may not be perfectly the same – but that’s how family recipes are passed along anyway.

The most basic ingredients are cake and custard, but true Italian zuppa inglese contains both rum and a colorful red liqueur called alkermes or alchermes. The cake is usually spongecake (pan di spagna) or a type of ladyfingers called savoiardi. It is filled with custard (crema pasticcera), some of which is also set aside and mixed with unsweetened chocolate before using it in a layer.

Mom’s adaptation used lemonade instead of rum, white cake instead of spongecake, food coloring instead of alkermes and no chocolate – perhaps because lemon and chocolate don’t go well together. Mine is basically the same as Mom’s but I noticed that many recipes added fresh fruit, so I include that as well now. 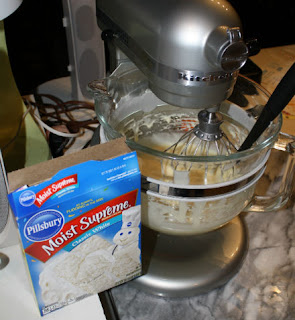 First, mix up a white cake following directions on the box. Divide the batter into both a 9” x 13” pan and an 8” x 8” pan, so the cake doesn’t come out as thick. You will have to cut about five minutes from the listed cooking time so the cake doesn’t burn. This will result in two cakes that are only about a half inch in height. When the cakes cool, take them out and cut them into strips about a half inch wide. 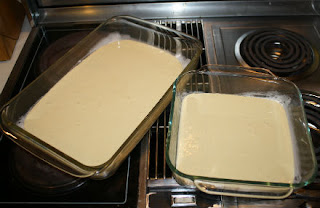 Take a can of frozen lemonade, which you have allowed to thaw, and divide the contents between three dinner plates. Tint each with food coloring. I use red, blue and green (traditional zuppa inglese was only red and white, but since coloring is more readily available now, why not make it brighter?) 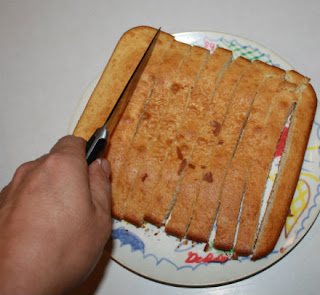 Dip the cake strips briefly into the tinted lemonade and use the strips to line the inside of a 2.5 liter clear Pyrex bowl, with the colored sides facing outwards (or color both sides). It is a good idea to coat the inside of the bowl with butter so the cake comes out more easily at the end. You can use a larger bowl to increase the number of servings, but you’ll have to mix more custard. 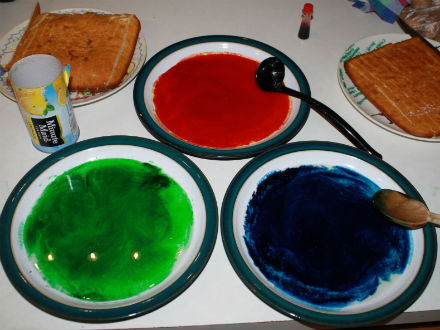 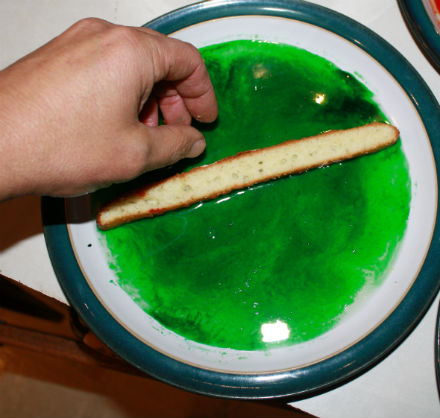 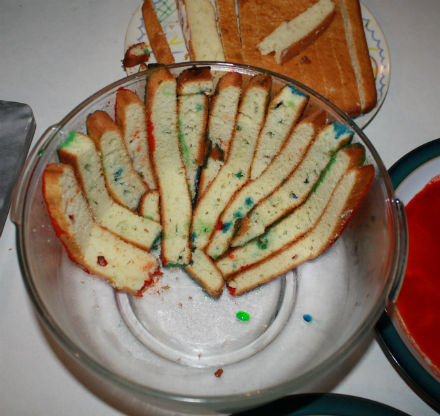 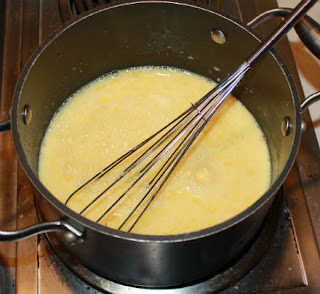 Now mix up two 2.9-ounce boxes of Jello “cook and serve” custard pie filling. Custard may be difficult to find at the grocery store, but you can buy it online at Amazon. If you don’t have the time to find a real custard mix, you can use vanilla pudding and add two eggs per box of pudding (or use a 4.6-oz. box of vanilla pudding and add three eggs). It is important to follow very carefully the directions that tell you to “stir constantly” when making custard. 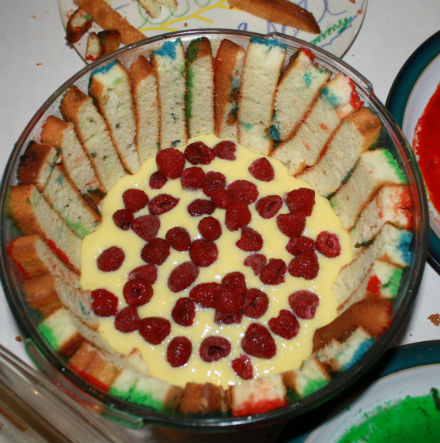 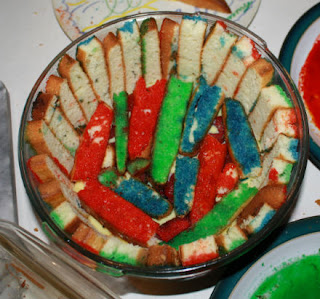 Pour a half inch layer of custard into the cake-lined bowl. Then add a shallow layer of fresh fruit such as raspberries, blackberries or sliced banana or strawberries. Build another layer of lemonade-dipped cake strips. Alternate layers of custard, fruit and cake strips until the bowl is full. I like to end with the colored cake strips, but pudding topped with strawberry halves also looks great. However, the top layer doesn’t matter that much, because before you serve it, the top layer will become the bottom layer anyway. 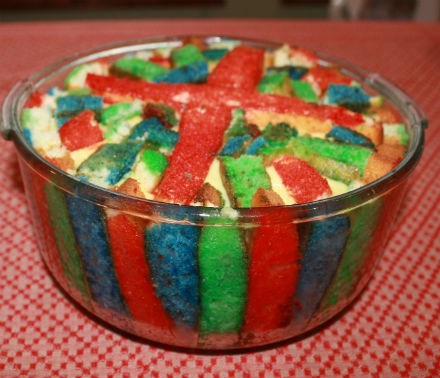 Now chill for 24 hours. Invert the bowl onto a plate, remove the bowl and serve. Mamma mia, che meraviglia!

Postscript: My sister Linda has much more knowledge about Mom’s traditional cake than I do, so I asked for her comments. She said that the bright colors I used were not normal. Mom “never used bright colors, only pastel pink, yellow, and green, and she made a picture or fancy design as the bottom layer, like Easter eggs or an Easter basket, or a flower, which is probably why she also said it was important to use a pan with a flat bottom.”
Linda also commented: “Another difference is that the cake mixes back then didn’t have oil to make them extra moist, so the slices were easier to handle. She used less water than called for also. She used a sharp knife to trim off the brown edges on the ends and bottoms of the slices, and of course she peeled off that top layer.”

Posted by Paul and Lucy Spadoni at 4:44 PM 4 comments: