My identity theft case continues to move at a glacial pace, a common occurrence with Italian bureaucracy. It’s now been two weeks since I was told it takes a least a week to obtain the record of the purchase and sale of the car I supposedly owned for almost two years. However, I did file a denuncia—a formal complaint—yesterday, and I’m happy that this went smoothly. 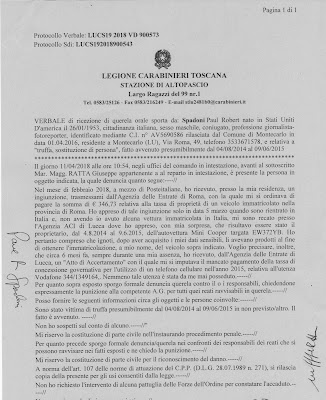 It helps to have good advice from friends. I may be more fortunate than the average foreigner because I have access to some useful resources. Although I was initially disappointed that I didn’t receive any help from my lawyer cousin, a couple of other relatives came through. First, distant cousin Paolo Venturini gave me the good advice to file a denuncia with the police. That brought to mind something I hadn’t thought of previously: I have another cousin, Claudio Del Terra, who is an officer with the Polizia Municipale of nearby Altopascio. I e-mailed Claudio, and he came to my home a couple of days later to hear my story.

At first he thought the notice may have had something to do with a car I might have rented in the past, but once he saw the documents I’d received from the Agenzia delle Entrate, he had no doubts that it was a truffa—a scam. Should I go to his office, or to the Carabinieri in Altopascio or Lucca? Claudio said he would make some inquiries and get back to me with a recommendation.

He e-mailed me a couple of days later that he had spoken to the Carabinieri head marshal, who said I could file the denuncia with him. I waited a few more days, hoping that the Sra Iacopi from the PRA (Pubblico Registro Automobilistico) would contact me to say that she had received the documents we are awaiting from Rome that will show the details of the bogus auto purchase and sale. When I still hadn’t heard from her by yesterday, I went to the Carabinieri anyway.

I could feel my heart pounding as I told the young officer at the front desk why I had come. Being in the headquarters of the state police of any country can be a bit unnerving, and of course my shaky skills in Italian added to my lack of ease. I had to wait about 15 minutes, which helped me regather my composure. I was welcomed into the office of Capo Maresciallo Giuseppe Ratta, who asked for my carta d’identità and other basic information, such as my phone number, occupation and marital status. I introduced myself as a journalist rather than a small business owner. Both are true, but being a journalist seems more impressive than being a guy who patches and seals asphalt during the summer. I also showed him all the paperwork I’d received from the Agenzia delle Entrate, detailing the approximately 1,000 euro I supposedly owed in unpaid auto and telephone taxes.

Sr. Ratta clicked his mouse and read documents on his computer for a good 10 minutes before asking me a few more questions. “Have you ever owned a car here? Do you know the person who bought the car?” I had typed out an entire timeline of my comings and goings in Italy, including the dates I had become a citizen jure sanguinis, obtained my passport, codice fiscale and residency. He didn’t need these dates, he said, and then he started typing rapidly on his keyboard while I waited in silence. We never mentioned my relationship with Claudio, but I’m sure that Claudio’s conversation with Marshal Ratta had been influential in the ready acceptance of my story.

He printed three copies of the denuncia and we both signed all three. Essentially it provides all the relevant details, “formally denouncing the unknown person or persons responsible and expressly requesting punishment by the competent authorities.”

And what do I do next? Does he need to see the documents from the sale that I’m awaiting from the PRA? No, the police can request those documents from Rome. Should I show the denuncia to the Agenzia delle Entrate? Yes, that’s a good idea.

So off I went today to the AE, but they had no interest in my prized one-page form. The lady at the Sportello Amico, the friendly desk, said that a denuncia is not enough to cancel the taxes owed. That will have to be done by the PRA, following an investigation. She suggested I take my denuncia there, which I did.

But after showing it to Sra. Iacopi, who had helped me two weeks earlier, she didn’t make a copy either. I was pleased that she at least read it, but she gave me the same story in different words. A denuncia is a good start, but it’s not enough. She called her counterparts in Rome to inquire again about the documents, and they told her they had not received them from the archives yet. Srs. Iacopi promised that she would contact me as soon as the documents reached her desk, and I was encouraged by the fact that not only had she recognized me immediately, but she also had my file right at her fingertips on her desk.

On the plus side, the slow pace of progress probably means that the AE won’t be breathing down my neck about paying these fees. After all, the taxes were from events that occurred in 2014 and 2015, and I had only received notice recently. Maybe it’ll take another two or three years before they even bother to send out a second notice.

Posted by Paul and Lucy Spadoni at 8:14 AM