Bicycle Runner provides a compelling inside look of war-shattered Italy 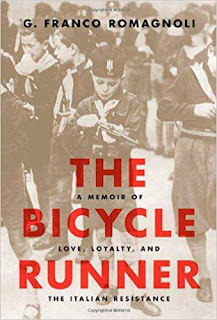 As William Shakespeare demonstrated, tragic stories can be quite compelling when well told. For me, this is even more valid when they are true stories about the suffering of Italian citizens during World War 2. I’ve read a number of these and have also personally interviewed former Italian soldiers and civilians who suffered through these dark times, and few have told their story better than Gian Franco Romagnoli in his posthumously published book Bicycle Runner: A Memoir of Love, Loyalty, and the Italian Resistance.

The story covers his life from age 14 to 25 in Southern Italy, during which time he joined the Fascist youth organization Balilla. Living in a middle-class section of Rome, his family sensed the ongoing “masquerade” since Italy’s invasion of Ethiopia several years earlier. As he and his friends became more aware of the realities of the war, they each had decisions to make. Some became fervent Fascists, but Romagnoli and many in his circle began to use their bikes to deliver books, pamphlets and messages for the resistance. They were too young to be drafted or suspected of subterfuge, and they put their status as innocents to good use.

For a time, Romagnoli maintained good relationships with childhood chums who chose Fascism. He recalls a parting scene with a brother and sister who were heading north to answer the call to serve Mussolini’s black shirts. “A sudden chill fell between us . . . we were going to part icily, perfunctorily wishing each other good luck and promising that if we ever met on the opposite sides of a battlefield, we would not shoot at each other. Or at least not shoot to kill.” The sister gave Romagnoli a scrap of paper from elementary school that they had both signed with blood which said, The Best of Friends. “I remembered when we had pricked our fingers, inspired by mafia indoctrination tales. I returned her hug and said that perhaps we should now sign our names on a new piece of paper titled The Best of Enemies.”

As he grew older, Romagnoli had more serious decisions to make. If he remained in Rome, he would be pressed into the military. He chose instead to join the resistance and live in the woods in a rural area in Le Marche, where he had spent many summers living with his aunt. His knowledge of the area proved useful to the partisans and a British intelligence officer sent behind enemy lines to help coordinate the scattered resistance fighters. He helped cook and operate the radio, though he never did quite understand the coded messages he helped to send. In one of the sadder moments, he discovered that a longtime friend (and distant cousin) among his group of confidantes had betrayed the partisans and passed intelligence on their movements to the Fascists and Nazis. However, before the traitor could be confronted and possibly executed, the German soldiers suddenly retreated.

Romagnoli reminisces, too, about his coming of age: his first love, his first sexual experiences, his fear of confession to the local Catholic priest and the warmth of his extended family. These heartfelt sketches and vivid descriptions of a deeply troubling time provide an invaluable depiction of a significant and fascinating slice of Italian history.

Posted by Paul and Lucy Spadoni at 1:28 PM