Can we survive in Montecarlo without a car? We’ll find out in October

The unpleasant discovery that the cost to rent a car in Italy has skyrocketed in the last two years has prompted me to once again consider buying e-bikes for our Montecarlo lives. I had anticipated a process of research and comparison shopping, but instead—uncharacteristically—I went home after a short conversation and medium-long test ride with a (nearly) brand new e-bike. 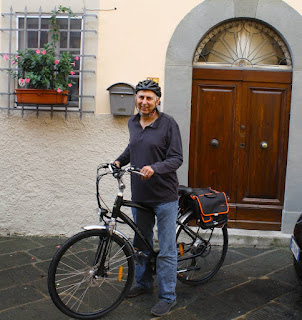 I had test-ridden an e-bike five years ago. An older Italian man had purchased it and didn’t like it, and he asked Franco Natali to help sell it for him. Franco let me ride it from Pescia to Montecarlo, and when I arrived dripping with sweat at my home, I knew immediately this bike was not powerful enough for me. It did get me up the hill, something our old mono-speed bikes could never do, but we were looking for something that we could comfortably ride from home to the Esselunga in Pescia or to our church in Altopascio. And, of course, back again, which is the real trick, since Montecarlo, as the name suggests, is a hill town 100 meters higher in elevation than Altopascio.

But technology has advanced, bike prices have dropped, and renting a car for two or three months will now cost us from $2,000 to $3,000. I figured that if we buy one bike this fall and then another next spring, we could save around $5,000—more than enough to buy two decent e-bikes.

A bike shop in Lucca that we used previously to rent bikes for guests has received high reviews, and the co-owners are very simpatici. Laurie is a transplanted American married to an Italian, Mauro. Both formerly raced bikes and have a ton of knowledge. Laurie is friendly, chatty and the kind of person who immediately inspires trust. She said we could easily buy a bike that would get me up the Montecarlo hill for around 1,500 euro. The current problem, though, is supply, as Covid has resulted in a shortage of parts for the factories, she said.

Laurie did have in the warehouse one 2020 Italwin, though, that had only been used as a rental a few times. She would sell it for 1,300 euros and throw in a helmet, and it would include a five-year warranty on the battery and a free tune-up when we come back in the spring. I took a test ride and came back with my mind made up.

Mauro said he would clean it up and check over all the components, and I could pick it up the next day, which I did. I took it on the train from Lucca to Altopascio, and then came the real test—Marginone to Montecarlo. I set the power to the highest setting and found I could easily surmount the incline, averaging between 17 and 23 kilometers per hour while pedaling easily, as if on a flat plane.


For the ultimate test, I decided to ride up the wrong way on the one-way street leading to the Porta a Firenze, a steep incline, and from there try the even steeper grade up to via Roma. I made it most of the way, and to do so, I did work up a decent sweat in the 80-degree weather. Though I had to walk the last 20 meters or so, I was satisfied with the results, because I hadn’t really expected the bike to climb the steepest and roughest streets of an Italian hill town (I tried it again the next day with fresher legs and a bit more initial momentum, and I did make it all the way up).

Since we still have a car for the next few weeks, and two friends from America have just arrived, the bike won’t get a lot of use for the next few weeks. But when the guests leave, we’ll be turning in our rental car, and the bike will be thoroughly tested for the last three weeks of our current stay. If it passes, we’ll be getting a second one when we return in March.