Moving along the wake of the propeller 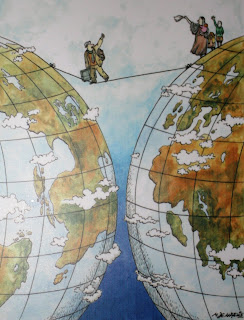 Wednesday, February 23
Whenever I look at the Ellis Island records, I am impressed by the boldness of the emigrants who left everything to come foreign lands full of strange people who don’t welcome strangers. Today we go to a special exhibit at Lucca’s Palazzo Ducale called Lungo la Scia di un’Elica, or along the wake of the propeller. It tells the story of the massive exodus of Italians during the late 1800s and early 1900s.

The country lost 26 million of its most ambitious citizens, with 5.7 million coming to the United States. Another 4.5 million went to Argentina and Brazil. Many took an easier route and went to France (4.4 million), Switzerland (4 million) and Germany (2.5 million). In the 1800s, South America was more popular, because people there spoke Spanish and Portuguese, easier languages for Italians to learn than English. Then because it was cheaper and closer, the focus switched to North America, and it was during the period between 1890 and 1920 that thousands of Lucchese came to the United States, my grandparents and other relatives included.

At the exhibition, we first see photos and displays showing the extreme poverty faced by peasant farmers of Italy—primitive farming tools and household furniture, animals living inside houses among the people, families gathered inside their large fireplaces to keep warm and children without shoes in crowded and chilly schoolrooms. Then we see the advertisements that lured the foreigners to pull up their roots—promises of land, wealth, opportunity and adventure. For those who followed the lure of adventure, we see samples of documents such as passports, ship logs and booklets instructing emigrants how to survive in the various new worlds.

We then walk through a narrow hallway/gangplank into the lower decks of a simulated ship, where we see how the third class passengers lived. Rows of roughly built bunk beds are packed tightly together. Personal possessions are stowed in gunny sacks, as few emigrants could afford the luxury of a suitcase or trunk. The lights have been turned low and we hear the throbbing of a ship’s engine to give us an idea what it must have been like to sit below decks with nothing to do for many weeks. Fortunately for us, the exhibit does not try to replicate the odors of stagnant water and sweaty bodies, and we don’t see any rats, but we do see photos of passengers sitting in near darkness on boxes and makeshift chairs, looking utterly bored and unable to find comfortable positions in which to rest.

After arrival in the new lands, the paradise that was shown in the brochures takes on a different look. Those who are too old, too young or too unhealthy are examined and sent back to Europe, sadder and even more impoverished than when they started. Those who survive the examination start at the lowest levels of society, often selling cheap items in portable stands, much like the African and Eastern European immigrants we see all over Italy today. The newcomers also faced discrimination and ethnic stereotyping. One painting shows bullies smashing the statues that a Italian boy was selling on the streets. Newspaper editorial cartoons sometimes depicted Italians as looking like rats or monkeys being dumped out of ships onto the streets. But of course they banded together to not only survive but to thrive. And some of them, now that their families are well established and secure, want to return to this remarkable land that their grandparents left behind. This last observation is not part of the exhibition, but here I am, almost as if I were a part of the show, drawn back to Italy by some unseen force. 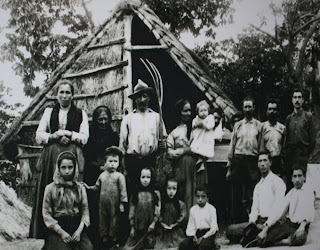 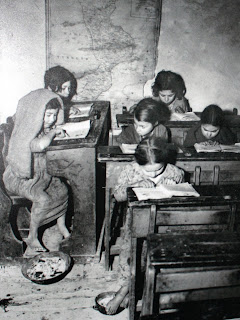 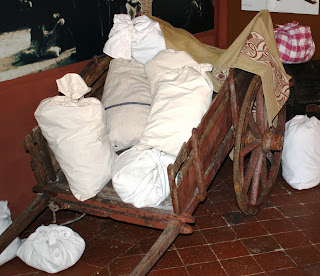 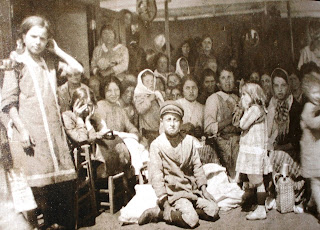 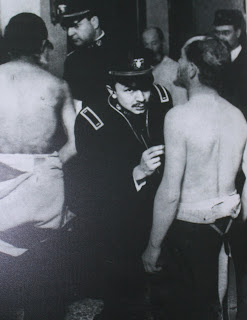 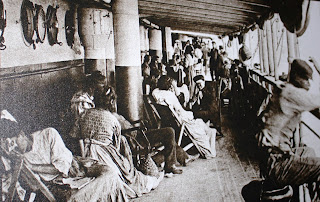 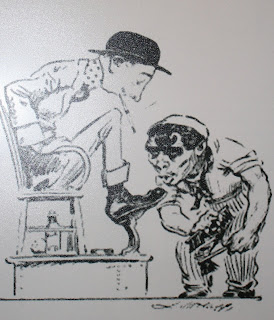 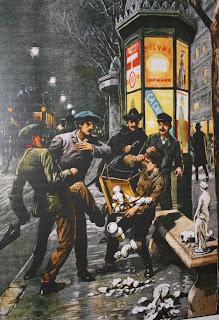 Posted by Paul and Lucy Spadoni at 3:48 AM