Visit to Vinci, birthplace of Leonardo, one of Tuscany’s best day trips 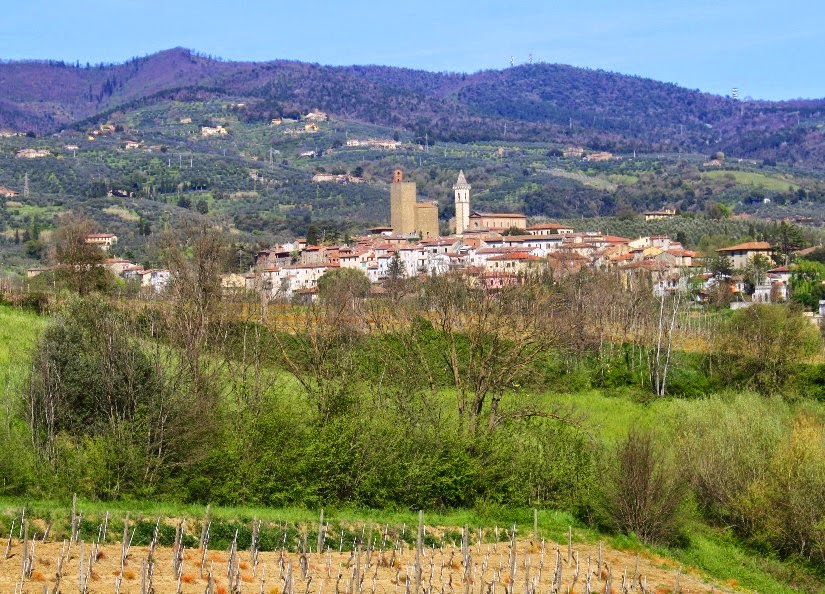 If you like to combine outdoor scenic beauty and picturesque hill towns with educational visits to museums for your Italy sightseeing, the Tuscan town of Vinci may be a perfect fit. Centrally located about 50 minutes from Florence, Pisa, Lucca and the Chianti region, it is best reached by car, but it is also possible to arrive by using a train-bus combination.

Vinci is located above the swamps of Fuchecchio on the west side of the Albano mountains, and the last 15 minutes of the drive bring you into lush hillsides covered with ancient olive groves, vineyards and tall Cyprus and pine trees. The town and its surroundings are largely unchanged from the days when young Leonardo roamed its stone-paved streets. Just to stroll through the city and drive or hike up the 3-kilometer Strada Verde that leads to his ancestral home would be enough to make the trip worthwhile.

If you need some snacks to refresh yourself, there is a pleasant couple with a variety of locally made products to fulfill your wishes. They offer free samples of brigadini, a sweet flat pasta that is a local specialty. They also sell cold beer, hot nuts, honey, a variety of sweets, cured meats, wine and olive oil.

The top attractions in Vinci focus, of course, on the multi-talented man who was born there April 15, 1452, as the illegitimate son of a notaio, Sir Piero, and Catherine, a peasant woman. Leonardo is often described as the archetypical Renaissance Man, described by author Helen Gardner as a polymath of “unquenchable curiosity” and “feverishly inventive imagination.” He is recognized as painter, sculptor, architect, musician, mathematician, engineer, inventor, anatomist, geologist, cartographer, botanist and writer.

The Casa Natale di Leonardo, re-opened with new displays in 2012, is listed as the town’s top attraction in TripAdvisor. You can save money by purchasing a ticket for both the ancestral home and the Museo Leonardiano, which is the number two attraction in Vinci. The room next to the ticket office offers a short history of Leonardo as an artist, starting from his entrance into Master Verrocchio’s workshop to his most important works. Probably the best attraction in the Casa Natale is a 22-minute holographic film where a life-like 3-D Leonardo reminisces about his life and accomplishments. The film alternates between English and Italian. Another room is devoted to an interactive display and explanation of the famous Last Supper, which also can be viewed in either language. Depending on your interest in the subject, this display can occupy your time for 30 seconds or 30 minutes. You can interact with the painting projected on a wall through a Wii-like application by just moving your hands, but it’s easier to use the small touchscreen off to the side.

“The gentle hills, the wide fields of vineyards and olive trees and the sun itself are integral parts of the museum and of its history,” write blogger Sara Turini. “This beauty has doubtless contributed to envelope and influence the fantasy, wits, creativity and genius of one of the greatest men in the world.”

Back in town, the Museo Leonardo is devoted mostly to his inventions. Engineers from IBM used the great man’s sketches to create working models of his machines, and since then other academics have donated more machines and computer animations to bring to life his concepts. Leonardo had the ideas, but he just didn’t have the technology or time to produce all of them. Included are a scuba diving apparatus, a modern air conditioner, a projection device, a self-propelled vehicle, a machine for making coins, a helicopter, a parachute, a swing bridge, hydraulic machines, a tank, a double-hull boat and a bicycle. Unfortunately, most of the explanations are only in Italian, but by good fortune, I was accompanied by a bilingual tour guide, our friend Elena Benvenuti, who is an expert on Leonardo.

Two other places not to be missed are the church with the font where Leonardo was in all likelihood baptized, and the castle tower, which has a spectacular 360-degree view of the town, hills and valley. Then there are the monuments that recall some of his famous works such as The Horse, created in 1997 by sculptor Nina Akamu, in the likeness of the colossal statue of Francesco Sforza that Leonardo never brought to completion, or The Man from Vinci, a sculpture by Mario Ceroli and inspired by the famous man of Vitruvius . The town has been awarded the Bandiera Arancione, a recognition of quality awarded by the Touring Club Italiano to select small towns for excellence in tourism, hospitality and the environment. I recommend taking at least three hours of free time in the town, plus another hour for a restful lunch or dinner, either outside with a picnic or in one of the restaurants.
Posted by Paul and Lucy Spadoni at 8:21 AM