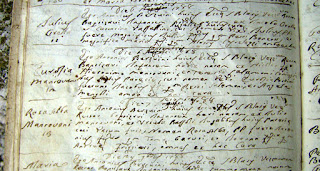 During the many hours I’ve spent poring over church archives in Pescia, I occasionally stumble across a child baptized with the designation ‟genitori incerti” or ‟padre sconsciuto.” This indicates that the parents or the father is unknown. I also find many parents with the surname ‟Innocenti,” or ‟degli Innocenti dell’Ospedale di Firenze” –of the innocent of the hospital of Florence, the place orphans were taken to be cared for, educated and adopted. Our Spadoni family tree contains almost a dozen persons with the name Innocenti, and I recently found one in my nonno Michele’s direct family line, Bibbiani Degli Innocenti, born in Tuscany around 1735.

The ‟Hospital of the Innocents” also known in old Tuscan dialect as ‟Spedale degli Innocenti,” is a historic building designed in 1419 by Filippo Brunelleschi, the same man who later designed the famous Duomo of Firenze. According to Lawrence Kahn, writing in the journal Pediatrics, the Ospedale in Florence is the oldest known institution continuously devoted to the welfare of children. It has provided care of infants and children continuously for more than five and half centuries. Although the Ospedale as an organization ceased to exist in 1875, the building still serves as a child care center and provides community child welfare services, including placement in foster care. It also houses a small collection of Renaissance art as well as a museum honoring the hospital’s history.

According to historian H. Saalman, the concept of ospedali in Florence dates back to the 13th century. Although the name may suggest a facility related to our modern hospital, it was closer to a hospice for the sick poor or a sanctuary for the abandoned or dispossessed, both young and old. Revenue came from bequests of money and land.

In 1294, the General Council of the Florentine Population delegated responsibility for the care of the “innocenti” to a powerful guild in the city, the “Arte della Seta,” or Silk Guild. For more than a century, the guild had had substantial experience in providing sanctuary for foundlings. In 1419, they requested and obtained the right to a bequest of 1000 florins to build a facility entirely for children. The Silk Guild planned to present the Ospedale degli Innocenti to Florence as a grand demonstration of their beneficence to the city. It also reflected the importance they assigned to the care of abandoned infants “deserted by their parents contrary to the law of nature.”

Children were sometimes abandoned in a basin which was located at the front portico. However, this basin was removed in 1660 and replaced by a wheel for secret refuge. A door with a special rotating horizontal wheel brought the baby into the building without the parent being seen. This allowed people to leave their babies anonymously, to be cared for by the orphanage. This system was in operation until the hospital’s closure in 1875. Writer Pier Paolo Viazzo quoted an epigraph written on the occasion of the closing by a distinguished Florentine, Isidoro Del Lungo: “For four centuries this was the wheel of the Innocents, secret refuge from misery and shame for those to whom charity never closed its door.”

The “Innocenti” policy established foundlings as individuals deserving the respect of society, Kahn observed. ‟Care sometimes continued for several years,” he wrote. ‟Typically, an infant was nursed at the facility until it was feasible to transfer him or her to a wet nurse in the countryside. After weaning, the infant was returned to the ‘Innocenti,’ where he or she might remain until ready for transfer to a foster home. Often they were placed with a family where they might learn a trade. Girls might stay at the ‘spedale’ until they could be provided with a dowry from a donor or public source. For others, it became a training school to prepare children for their future occupations.”

Similar hospices for orphans were created in many large Italian cities, but the children were given different surnames, including Trovato or Trovatelli (found), Esposito (exposed), Proietti (cast out), Abbandonato (abandoned), and Casagrande or Dellacasagrande (of the big house). It may seem like these names could be stigmatizing, but orphans were quite common, and it seems that the names were not considered at all derogatory. However, there was some sensitivity to the possibility that such names could be a source of dishonor, and so some ospedali later began using the name of the city, or sometimes the month the child was born. As an interesting side note, this means that the famous New York Yankee Joe DiMaggio probably had an orphaned ancestor, for DiMaggio means ‟of May.”

According to Kahn’s research, the disposition of many unwanted children had been erratic prior to the founding of ospedali. ‟Sometimes a foundling was left in a public place where chance alone decided his or her fate,” he explained. ‟In addition to those who were illegitimate, there were many infants whose parents were unable to provide their care. As soon as 1467, the ‘Innocenti’ was caring for 600 children and housing 200 orphans, foster mothers, or wet nurses and men.” 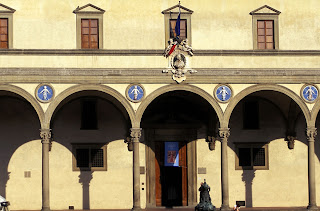 Viazzo noted that in 1647, records show that “there were 1091 children in foster care, 28 nursing infants in the hospital, 21 wet nurses, 642 infants, children and mothers of all ages, 98 other children, 40 priests and other ministrants, the prior, and an additional 25 infants sent to San Gimignano” Throughout its history, he said, the ospedale accepted 375 000 infants and young children.


Kahn, who was writing for a publication of the American Academy of Pediatrics, explained why the Ospedale has a special significance to the AAP.


‟When people looked at the building during its early years, they saw 10 blank roundels, concave circular frames set within the spandrels, the spaces created between the arches. Then in 1487, four decades after Brunelleschi’s death, the 10 ‘bambini’ by Luca della Robbia were mounted in the roundels. In 1845, two additional pairs of ‘bambini,’ reproductions of some of the originals, were installed at either end.”

Each of the originals is unique. Seven are fully swaddled from thorax to toe, and two are depicted with the swaddling clothes still tied but sagging below the waist or knees. In 1939, the AAP chose a slight variation of a baby with swaddling clothes untied for its insignia.

‟What della Robbia had in mind with this one variation is hard to say,” Kahn continued. ‟Perhaps the loosened swaddling clothes represent liberation from the constraining stigma of the foundling origins of the ‘bambino.’ Modern pediatricians might consider it a symbol of emancipation from health care practices based on ignorance. Some might consider the unwrapped swaddling clothes as liberating children from illness. In any event, this ‘bambino’ is robust and free. Ultimately the AAP chose this ‘bambino’ for its insignia . . . the AAP chose well.”