Seghieri and Sighieri are rather unusual names that seem to all derive from the same source and location in Tuscany in the areas of Pisa, Montecarlo, Altopascio and other locations between those cities. 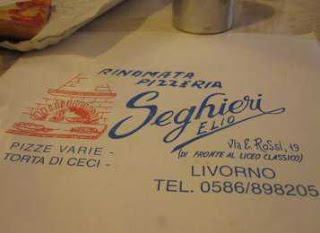 Doctor Sergio Nelli, distinguished author and historian who works at the State Archives in Lucca, believes the various versions of these names derive from the Lombards (Longobardi in Italian), a German tribe that originated in the far north of Europe, passed into and through Germany and then invaded Northern Italy and Tuscany. This tribe never seems to have stayed in one place for long, moving from north to south and adopting the language and customs of the people they conquered and leaving their architectural legacy as far south as Sicily. They established a kingdom in Italy that endured from 568 to 744, although Lombard nobles continued to rule parts of the Italian peninsula until well into the 11th century. The name of the region Lombardy derives from these people.

During medieval times, the name was Latinized and appears in lists of important residents between Pisa, Florence and Lucca as Sigherius, Segherius, Sighierius, Sicherius and Sicherii. Latinization would have been common at that time, because after the Roman Empire collapsed in Western Europe, the main bastion of scholarship was the Roman Catholic Church, for which Latin was the primary written language. Of the two most common versions of the name today, Sighieri is used more in Pisa and surrounding areas and Seghieri in the areas of Montecarlo and Altopascio. Another variation found throughout the same region in Tuscany is Sevieri, most likely from the same origin.

Namespedia.com said the surname Seghieri occurs 75 times in Italy, 35 in France, 28 in the United States and 10 in Argentina. It has no listings for Sighieri, which causes me to mistrust its accuracy, since I know that variation is common in Tuscany.

Another website, forebears.io, says the Seghieri surname is found 190 times in Italy, 98 in France, 75 in Argentina and 31 in the United States. It also lists Sighieri: Italy, 157; Brazil, 64; and France, 49; United States, 0. However, forebears also says Seghieri is found in Algeria a whopping 446 times, and I find this hard to believe. However, I do find a few people from Algeria with the surname on Facebook, and it’s possible that the Algerian Seghieri families have been overlooked previously because of an absence of central name databases there. If any members of the Seghieri/Sighieri Facebook groups can add insight, please contact me or leave a comment.

Posted by Paul and Lucy Spadoni at 2:26 PM