Tiramisù has its own day now, but don't let that hold you back!

Although invented less than 100 years ago, tiramisù is now indisputably the most famous Italian dessert in the world. In fact, a study conducted by the Società La Dante in 2008-09 concluded that tiramisù is the fourth most important Italian term from “a historical and cultural” point of view (the top three were pizza, spaghetti and espresso). It now has its own day in food culture: March 21 has been designated “Tiramisù Day” by an Italian food organization.

A study carried out by the Associazione Italiana Lattiero-Casearia (Italian Dairy Association) in 2012 found more than 14 million occurrences of the word “tiramisù” in the search engine on the Chinese web, and the name of the dessert appeared 7.8 million times on Japanese language websites, 3.4 million on German, 3.1 million on French and 2.2 on Spanish websites. In addition, English language websites told the story of and how to prepare “the original Tiramisù” 18.6 million times. Culinary authors Fernando and Tina Raris also point out that in Japan Tiramisù has become a “status symbol” among young and adult people, and customers rush shops and pubs that display the Italian flag and “Tiramisù for sale” signs in their show windows.

Though there are many recipes, tiramisù is generally a mixture of espresso, creamy mascarpone, marsala (and sometimes rum as well) and usually a type of ladyfingers called savoiardi. It is all topped with cocoa powder and chilled, then served semi-freddo. The Italian name tirmisù translates literally to “pull me up,” although “pick me up” may better correspond to English usage. While food aficionados worldwide agree on its merits, tiramisù does generate plenty of controversy regarding its birth. 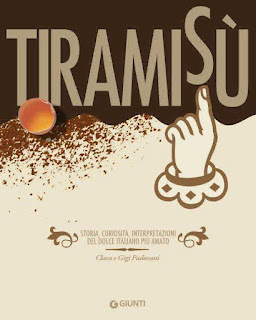 An entire book on the popular dessert was published in 2017, titled Tiramisu: Storia, curiosità, interpretazioni del dolce italiano più amato. Authors Clara and Gigi Padovani researched its much disputed origins and are convinced they discovered the truth. They maintain the recipe was originally created between 1940 and 1950 in Italy’s region of Friuli-Venezia Giulia. Chef Mario Cosolo invented the recipe at his restaurant Al Vetturino di Pieris and originally named it tirimesù, with is a dialectical variation on the mainstream Italian spelling.

However, the region of Veneto is largely responsible for popularizing the dessert across the world. Chef Paolo “Loli” Linguanotto of Alle Beccherie restaurant in the historical center of Treviso, who also claims to have invented tiramisu, has done much to popularize the treat. Another Treviso restaurant, Al Fogher, makes something called coppa imperiale, which it claims predates tiramisù but contains the same basic items.

It was the Padovanis who proposed Tiramisù Day, collaborating with the Italian food chain Eataly and choosing March 21st because, as they put it, “There’s nothing better than tiramisù to celebrate the arrival of spring and to leave the grayness of winter behind.” On the initial Tiramisù Day in 2017, the Padovanis were joined by Flavia Cosolo, daughter of Mario Cosolo, as she prepared the original tiramisù recipe that her father created.

It’s perhaps fitting that the Veneto should receive much of the credit, since coffee was first introduced to Europe from Egypt through Venice, where a flourishing trade between the local businessmen and Arabs enabled a brisk trade of commodities. Because of its eastern roots, coffee was at first considered sinful and regarded as an Islamic threat to Christianity. However, its popularity grew, and Pope Clement VIII, upon sampling the heathen drink was instantly enamored by the unique taste and aroma. Apparently, he decided it would be a greater sin to deny people such a delightful beverage, and thus it was deemed acceptable and spread rapidly through Italy.

As for recipes, they vary widely, and I’ve not tested any of them. I am more of a gourmand* than a chef, happy to try out the creations of others who have more experience in the kitchen than I. Mascarpone and the savoiardi that many people use in their recipes can be hard to find, unless one lives in Italy or near a store that stocks authentic Italian food. The authentic recipe used by the Cosolo family can be found online (though the directions are only written in Italian, I believe), as can English versions of Loli Linguanotte’s recipe. My advice, which I follow religiously, is to celebrate Tiramisù Day at least once a month at the most convenient restaurant or bakery. Amen.