Here we go again! Another attempt to scam people using my good name

My evil “twin” has struck again, claiming my identity to run up some utility bills with Simecom Gas e Luce, an energy company located Crema, near Milano. I know absolutely no details about when, where or how my name was used, but I know that Simecom is taking this seriously, because they have filed a court action claiming that I owe them € 3.199,18. Furthermore, they have frozen my Italian bank account, which is set up to automatically pay for my water and garbage, and my real energy bills, which are to a different company.

I found out about this on May 3, when I received an email from an official at my bank:

Basically, this says Simecom has filed to foreclose our bank account and claim the money in it. At first, I suspected that there was something fishy about Simecom, but it is a legitimate company that has been in business for more than 60 years. After requesting help from dear friend Elena Benevenuti, we received from our bank an emailed copy of the court filing from March of 2020 asking the justice of the peace in Lucca to freeze our account. Furthermore, I am supposed to appear before the “Tribunale di Lucca il 7 luglio (July 7) 2021.”

No details are given of how I supposedly ran up this bill. Elena wrote me: “The bank highly recommends NOT TO SEND ANY MORE MONEY TO YOUR ACCOUNT until your position is clear, because they are compelled to stop all your money (the one in the account and the future income). I stay constantly in touch with the bank. I am sure we will solve the problem.” 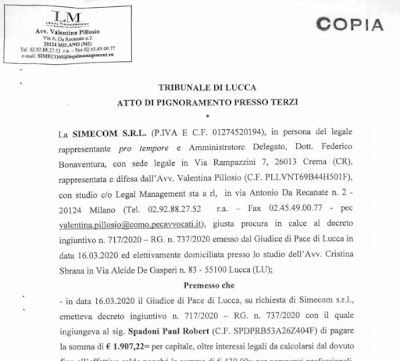 Readers who have been following my blog will know that a fake Paul Spadoni in Italy has also used my name and codice fiscale (similar to a Social Security number) to buy and sell cars and take out a phone contract, as well as trying to scam private individuals in various ways.

It is likely that Simecom has sent notices in the mail to my Montecarlo address, but because of COVID-19, I have not been in Italy since fall of 2019. The letters could be in my postal box, or they may not have been delivered at all if they required a signature.

In any event, I would just as soon keep my money, but what am I to do? My Italian language skills are only so-so, and because of work and family obligations, I can’t go to Italy in July. Of course, I have Elena and another friend, Angelika, to help me, but I should probably hire a lawyer to represent me in court, or at least to request a continuance.

However, I have some faith in the common sense and humanity of the people in Italy (well, not in the guy who keeps trying to assume my identity, but most Italians), so I’ve decided to appeal directly to the lawyers at Simecom. I will write them to explain the situation and hope that someone takes the time to read my rather lengthy plea. My next blog entry will be a copy of my letter, which I will write in English in the confidence that some of the lawyers at the firm must read English better than I write in Italian.