E-bikes add to pleasure of planning for family reunion; never mind the bumps 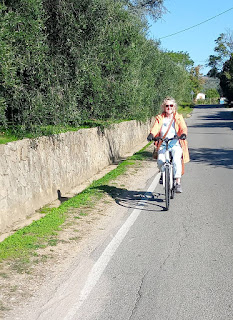 We’ve reached a conclusion about our experiment with e-bikes in Montecarlo: They are a smashing success! I’ve ridden mine every day since we turned in our rental car. Even if I have no particular place to go, I think of something that needs to be done, just to give me reason to take a ride. Lucy does not go out as often, but when she does, she loves it too, and the power our bikes provide make it easy to climb back up the hill to our house.
When we stayed at the Casolare dei Fiori from 2010-2015, we used our old mono-speed bikes as our primary means of transportation. The train station was a 10-minute ride away on roads that were mostly flat. We could reach Pescia, Altopascio, Chiesina Uzzanese, Borgo a Buggiano and Ponte Buggianese easily, as they are all on the same elevation as San Salvatore. For the most part, we could ride on back roads that had little traffic.
All of that ended in the fall of 2015, when we bought a home in Montecarlo which we dearly love—both the city and the house. Our old bikes couldn’t make the climb up the hill, so ever since, we rented a car each time we came, until now. While we may need to rent a car again on rare occasions, for the most part, our bikes will serve us for all our needs—and give us much more pleasure than a car. Riding in the open air through splendorous Tuscan fields and olive orchards is heavenly. Doing it on bikes that require almost no effort and are soundless except for the whirl of wheels on the pavement is like an exquisite dream of flying just a few feet off the ground.
OK, maybe that’s going a little too far, because there are a few drawbacks. It hasn’t rained here since we started using the bikes, and that will probably change by tomorrow. And the temperatures are dropping from the low 70s to the mid 60s. In November and February, months we also like to spend in Montecarlo, it’s not going to be as pleasant as it is in the other months that we’re often here—March, April, September and October.
One other small drawback is the condition of the roads. It’s astounding to me that a country that has produced some of the world’s greatest craftsmen, architects, artists, masons, engineers and inventors can be so terrible at making and patching asphalt roads. I can accept that the roads are often narrow, because the rights of way historically only had to fit horse and donkey carts. I can even accept that the country couldn’t afford to put down a decent gravel base before they paved most of the rural roads. Most of the paths had undergone centuries of use, and the base was already well compacted. What surprises me the most is the incredibly poor job of patching that the workers perform, and that the government allows this.

We often have to ride close to the edge of the roads to allow cars to pass, and that’s where much of the patching takes place, so we must bounce over patched road crossings where utilities have been installed. The patches are usually done with cold mix asphalt compacted only by traffic, and sometimes roughly laid concrete that was not even allowed to cure before it was opened to traffic. Give me a break, you guys! Take some pride in your work. Even without using hot asphalt and a roller, you could make patches that are at least level. Instead, they are either raised up like speed bumps or sunken down and misshapen.

Enough ranting, I guess. No, not quite enough. I know I’m more sensitive to this because I still do asphalt patching as a profession. I take pride in driving over an area I’ve patched without feeling any change in grade. Don’t these workers drive on their own roads? Doesn’t the government have any power to reject obviously inferior work?


OK, I’ve finally finished with my rant and can return to the joy of riding our bikes. I’m currently working on researching places to visit and things to do during the family reunion next May. Last week we rode to Elena’s house and made some plans. I learned that the French Seghieri families are way ahead of us. They already know that about 35 people will be coming from France the first week in May, and they have a tentative plan for their activities. I realized that I have no idea how many people are coming from America, so I need to start taking reservations and figuring out expenses. In the past week, I’ve been refining the agenda, sampling and reserving restaurants and exploring meeting places while also working out how to fit our plans together with our French family members. All of this is made more pleasant by doing it via bike rather than car, so I really should not be complaining about a few bumps in the road.

Posted by Paul and Lucy Spadoni at 6:45 AM