We chose the perfect time to come to the Amalfi Coast. The weather in early October is mild—70 to 80 degrees every day. Covid restrictions are moderate; masks are required inside, but we almost always dine outside, and most of our favorite activities are outside as well. And at this time of year and because many foreigners are still reluctant to travel, crowds are small.

We also picked a great city, Maiori, which did not require a long drive on the torturous, twisting coastal roads. The beach area is the largest of all the Amalfi Coast towns, and the city has all the services needed without as many tourists as Amalfi, Positano or Sorrento. I feel the ratio of tourists in Maiori is about one tourist to every four or five residents, whereas in the city of Amalfi, it seems the reverse.

We walked the Sentiero dei Limoni our first full day, a trail that climbs over a ridge and connects Maiori to Minori, with semi-spectacular views of both cities. It’s about and hour to do the walk, unless you stop frequently to rest, talk and take photos of lemons, lizards, cats and the view—or in the case of our biologist friend Dave, photos of bugs having sex. I give the hike a four out of five stars, and Wendy and I chose to walk back to Maiori on the road, which took only 20 minutes. 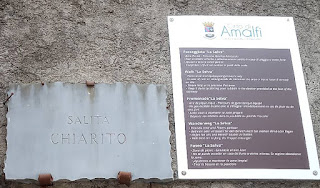 Today we found an even more interesting hike, one perhaps less well known. We took a ferry to Amalfi, which at first seemed like a mistake. The waterfront area and up the first 800 meters of the main street, it was packed with tourists and overpriced souvenir shops. But as we climbed higher on the Via delle Cartiere, the crowds thinned dramatically. The road came to end with a metal barrier, but a stairway continued to the left with a sign calling it Passeggiata “La Selva.” Strangely enough, this attraction is not listed anywhere on Tripadvisor, but the sign says it has a “Area Pic nic – Percorso Ginnico Attrezzato,” which it also translated into English as “Picnic area and equippped gymnastic way.” Gotta love those computer translations combined with human typos.
The hike took only about 20 minutes on a smooth and easy trail alongside a stream that had historically been used to power many paper mills in Amalfi. After about 10 minutes, we came to the ruins of one mill. In another five minutes, we found the picnic area and a little outdoor workout gym, as promised. The equipment all looked as if it had been installed just a few years ago, which might explain why the trail and park are so undiscovered. 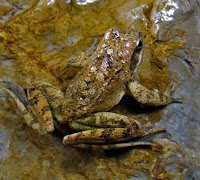 The best part of the hike, though, came a few minutes later, when we came upon a less ruined paper mill, with waterfalls on either side. The trail ended there, with a wooden fence blocking access to the inside of the mill. But wait! Lucy looked down and saw that there was a latched gate that could open, letting us into the mill, where we could stand on the top side of a waterfall. We spent about 10 minutes inside the mill, snapping some fun photos. We even saw frogs!
You gotta love Italy for this kind of attraction; in America, there would have been a chain link fence blocking entrance to such a potentially dangerous site. Dave took off his shoes and waded across to get a closer look upstream. I slithered along a ledge with my back to the wall to go further inside, barely avoiding slipping into the shallow water. We left knowing that this surely had been the best part of our day. We had started our walk in Amalfi rather disillusioned with the crowds and touristy shops, but this little used trail made our day.
Once back on the road, we ate at the last of many restaurants, where we were the only customers—and the food and service were fantastic. I asked the owner, Rocco, if he had gnocchi, and he said he didn’t, but he had a pasta that had potatoes in the sauce. I ordered that, but soon after we saw the Rocco disappear on his scooter and then return five minutes later. In his hands he had a package of fresh gnocchi and a bag of caciocavallo cheese. He made me a generous serving of the best gnocchi I’ve ever had, thanks to his special sauce combined with the cheese. 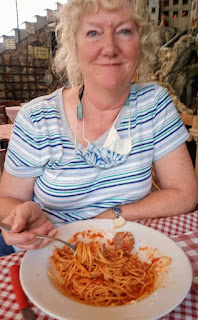 Lucy and Wendy ordered spaghetti and meatballs, a dish that I’ve been told does not exist in Italy (spaghetti is a first course, and meatballs are a second—they are never combined in Italy). I asked Rocco about this, and he confirmed that this is so, but apparently he has served enough Americans to realize that they love their spaghetti with meatballs, so he has made an exception. 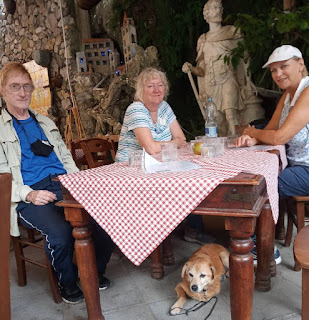 Rocco’s friendly dog came up and got some serious loving from Wendy and me, rolling over on his back to have his belly rubbed. When we told him that was enough, he put his paws over his eyes in such a cute manner that we just had to give him some more love. Then he spent the rest of the meal lying under our table. He was on a retractable leash that Rocco had fastened to a chair, but just as we finished our meal and started walking away, he managed to get away and run down the street dragging the leash behind him and disappearing. Rocco appeared unperturbed, and as we walked further on, we saw that some tourists had picked up the leash and prevented the dog from further flight. Just then, Rocco passed us on his Vespa. He took the leash from the tourists and thanked them, and the doggie hopped onboard the Vespa and rode back home with Rocco. We had the definite impression this was a common occurrence from the matter-of-fact way that it unfolded, and it left us liking both Rocco and his dog even more. 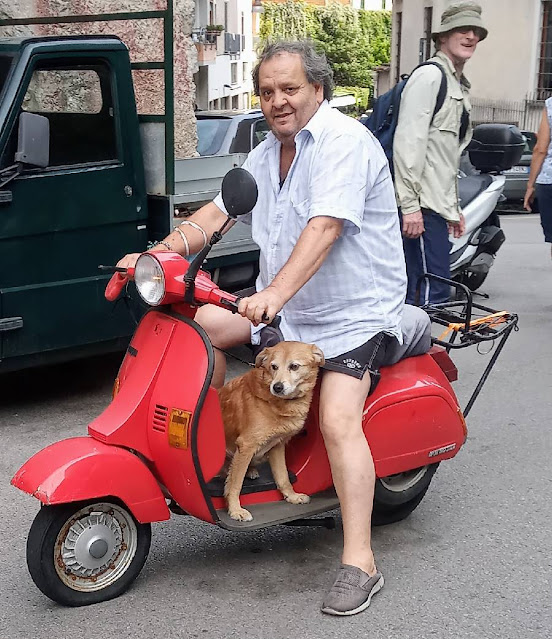 Posted by Paul and Lucy Spadoni at 2:43 PM