What is the story behind the little known Casotto Spadoni? 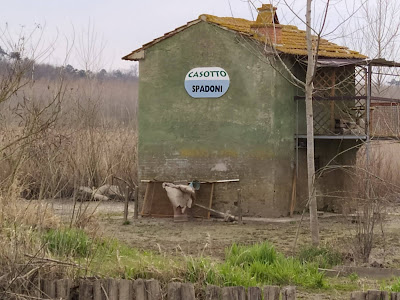 About a month ago, a friend, Luana Raveggi, sent me a photo of a ancient and battered house she saw while taking a walk in the Padule di Fucecchio, a swampy area south of Ponte Buggianese. Because Luana and I share an interest in genealogy—we met while doing research on our family trees in the parish archives in Pescia—she knew I would be interested in seeing the Casotto Spadoni. And of course I was, and now I’m on the trail of the history behind this ramshackle house.

Casotto can be translated as shed—or “a small construction of a single room, in wood or other material with functions of shelter or temporary accommodation for people or materials.” So the term is not entirely accurate in this case, as the Casotto Spadoni is a two-story house that was probably used as a dwelling place years ago. Luana gave me some directions and photos to help guide me to the place, and so Lucy and I set off on a lovely afternoon on Pasquetta—the day after Easter—to find it for ourselves. 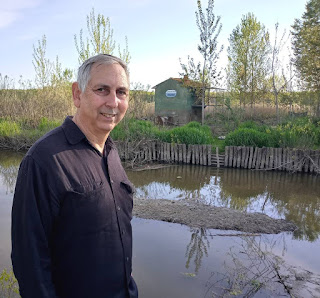 We passed many people out strolling, as Pasquetta is a traditional family-oriented holiday in Italy. I stopped to ask several walkers if we were on the right path towards the Casotto Spadoni, but nobody we met had ever heard of it. We continued on, trusting in the directions I’d received from Luana, which proved to be very accurate.

Our only disappointment on finding it was that the casotto is on the other side of the canal from us, with no bridge in sight. About a half mile back, there had been a bridge, but the trail on that side of the canal was marked private property and was blocked first by a chain and then a private residence, with fences and gates on both sides of the home. There could be a trail into the woods behind the Casotto Spadoni, but we couldn’t see it from our side of the canal.

As for the history of the home, I am almost sure of one thing: This must have been the home of Agostino Spadoni and Isola Fanucci in the summer of 1944—the last summer of Agostino’s life, as it turned out. He was one of the first residents of Ponte Buggianese to be shot in cold blood by the occupying German army that summer. His death, however, was only the beginning of the tragic brutality that was to come during the infamous Slaughter in the Padule di Fucecchio. I was aware of Agostino’s death because a few years ago, I wrote a series of blog posts on the Eccidio del Padule di Fucecchio, which includes an account of Agostino’s death. Today the Padule is checkered with monuments that show where various civilians were shot and killed by the 26th Panzer Division. There may even be a marker near the house to commemorate where Agostino died. If so, I hope to find it one day. I have learned through Luana’a contacts that the house was recently sold by the widow of the late Gianfranco Spadoni. By contacting her, I discovered that Gianfranco’s grandfather was the first cousin of Agostino. Quite likely the home was shared by the greater family at the time Agostino was murdered, and it ended up in the ownership of Agostino’s cousin and his descendants.

I’ve since been contacted by Gianfranco’s son Damiano, who is interested in learning more about the Spadoni family history. Hopefully, we will meet soon, and Damiano can tell me more about the casotto as I fill him in on the early story of our ancestors in Ponte Buggianese, Stignano and Marliana. Meanwhile, I am strongly considering altering the agenda of the family reunion tour on May 2 to include a visit to the casotto.

Posted by Paul and Lucy Spadoni at 1:43 AM