"Only Our Destiny" provides valuable insights into wartime Italy

For those interested in life in Italy before and during World War II, Only Our Destiny, by A.G. Russo, is an entertaining and informative choice. 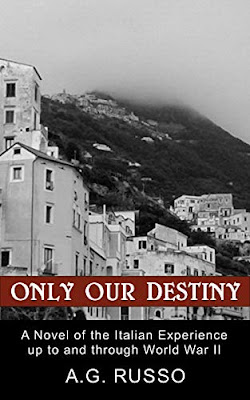 This historical novel, published in 2020, focuses on an impoverished family from the fictional town of Punto Roccioso, a small seaside town south of Napoli. Along the way, the story covers many important aspects of those troubled times, including the ravages of the Spanish Flu, the dictatorship of Benito Mussolini and his black shirt thugs, the unfortunate lives of men drafted into a woefully unprepared and inadequately supplied military, living in a British prisoner of war camp, food shortages, persecution of Jewish Italians, the struggle for control between Fascists and the Camorra, discrimination against Southern Italians and the rise of the partigiani—the underground resistance fighters who harassed the occupying German army.
Raffaela struggles to survive and feed her ten children without help from her estranged and abusive husband Giuseppe, who abandons her for another woman and embraces Fascism. When Mussolini brings Italy into the war on Hitler’s side, the suffering Southern Italians are further devastated—harassed by Fascists and the occupying German army. Raffaela’s oldest children, Geno and Luisa, help her hold the family together and find enough food to survive. They befriend the family of a wealthy Jewish doctor who has been unfairly exiled to Southern Italy, and this leads to both trouble and romance for Geno and Luisa.
The saga also touches on the struggles of Italian Americans, as Raffaela’s young uncle Corrado moves to New York’s Little Italy to seek the American dream. Facing hardship and prejudice, he and friends manage to build a business, only to have it ripped from them when Corrado is confined to an internment camp for Italians. Their courage and the ability to rebuild are a testament to the resilience of the many immigrants who left their homeland with little else but a dream and established and molded America in the process.
The character development and evolution of relationships between central figures is strong enough to keep interest high, especially for readers with an interest in Italian society and the realities of wartimes. The book could have been helped by stronger editing, though, which would have improved sentence structure and punctuation and eliminated some repetition and needless sentences. The book also suffers from some typographical and factual errors and some mistranslations into Italian. Salerno is often misspelled as Solerno. The Italian word che is several times misspelled as que and the word for yes (sì) is consistently missing the accent over the i. The Gothic Line is incorrectly referred to as being located south of Rome.
Overall, these minor shortcomings are more than recompensed by the entertaining storyline and valuable historical insights. Don’t expect this to be an entirely uplifting and cheerful tale, though. These were dark times that brought hardships, misery and death—but inspiration can be found in the courage of Raffaela and her family, who sacrifice and work together persistently in an attempt to survive and hopefully thrive.
***
Update: I was recently contacted by A.G. Russo, who wrote:

Thank you for the review. I just made changes to the errors you pointed out. All four of my grandparents and my mother were Italian immigrants. My father, also of course, was Italian, and born in Hell’s Kitchen in New York. I spoke Italian as a child when we lived with my grandparents but have since lost most of it, except for the swear words. (The last thing to go.) We spent almost three months in Italy last year and I made contact with family on both sides. I still communicate with two of my Italian cousins and I’m tracing my genealogy. We also went to England on a previous trip because my granduncle went there instead of America and we met that family.

Some incidents in the book were told to me by my uncles, but I have no way of knowing if they’re true or exaggerated family lore, so I had to consider them fiction for the sake of the book. But I will say both my grandfathers and grandmothers were very much ‘of their time.’ I have Italian American friends who were stunned reading the book and had no idea what it took for their families to come to America and thrive. Judging from the reviews, most people, even those who are not Italian Americans, are surprised as well.

--------------------
Author’s note: I have also reviewed several other worthwhile books that provide nonfictional accounts of wartime Italy, including:
Beneath a Scarlett Sky
Bicycle Runner
Franca’s Story
Posted by Paul and Lucy Spadoni at 12:46 PM