What do Oliver Twist, Anne of Green Gables and Little Orphan Annie have in common? Of course, they were all orphans—and they were also mistreated and unhappy, even if their stories end happily. Their experiences lead many to believe that the lives of orphans in the past 500 years were, with few exceptions, mostly miserable. Possibly that is true, but in Italy, at least, orphans during the middle ages and renaissance era were generally well looked after by the Catholic church and charitable organizations.
I’ve written about this before in Care for the Innocenti and Museum for the Innocents, but I’ve just come across a real life success story that highlights this point. Italian-American genealogy buff Michael Lomagno discovered that his quadrisavola (great great great grandmother, or third great grandmother) was an orphan. She was given up shortly after birth and named Vincenzia Aprilini by an orphanage in Prato, Tuscany, the Ospedale della Misericordia e Dolce. She arrived at the hospital April 9, 1825, which explains the surname she was given. 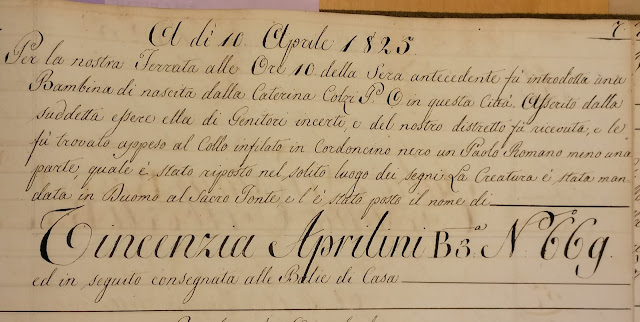 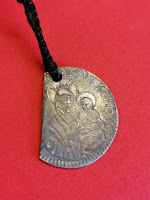 Her unknown mother tied a black cord around her neck, from which hung a medallion—a Bolognese coin minted in the late 1700s. A piece of the coin was cut off, a common practice that assured that the mother could later reclaim her child by providing the missing piece of the memento.

For most researchers, finding that they have a “trovatelli” or foundling in the family line means a dead end—but Michael is not an ordinary researcher. He wrote an inquiry to the State Archives in Prato, and with the help of archivists there, he discovered a wealth of information.

“For many years I thought of Vincenzia as an abandoned baby who perhaps had a miserable childhood in an orphanage,” Michael said. “I was wrong.”


Michael discovered that Vincenzia was baptized in the Duomo di Prato and only spent four days at the orphanage before being whisked away to the countryside where she lived with her wet nurse for the first year and a half of her life. Nursing mothers were paid a small stipend to care for newborns, so this was a common practice.

But this is where the story takes an especially interesting twist: The wet nurse was also one of Michael’s ancestors, his fourth great grandmother, Maddalena Mazzoni. She had recently given birth to a son, Bartolomeo Incrocci, who is Michael’s third great grandfather. For the first years in the lives of Bartolomeo and Vincenzia, they were raised as brother and sister, and a bond likely formed—but once Vincenzia was weaned, she had to move on to another family. Maddalena received a payment of 159.56 lire for her services. Now a dry nurse would be appointed to raise Vincenzia until age 14, at which time she could be returned to the Ospedale for occupational training.

Her new family turned out to be very close indeed. The supervising priest made a special request to the Ospedale asking that Vincenzia be moved to the family of Maddelena’s childless sister Rosa, whom he attested to be “of good morals.” Rosa and her husband Gaspero Benedetti kept Vincenzia in their home until age 19, which strongly indicates that she was welcomed and loved. Vincenzia and Bartolomeo grew up playing together, probably seeing each other nearly daily.

When Vincenzia did leave the family home, it was for a very special reason. She and her childhood “milk brother” Bartolomeo were married. They had nine children, the eldest of whom was second great grandmother of Michael Lomagno. Vincenzia also had at least 38 great grandchildren and lived until age 77.

Michael discovered the story of her childhood with the help of records kept at the State Archives in Prato and the hospital for orphans.

“What was truly special and humbling was to hold the medallion that was around Vincenzia’s neck when she was given up,” Michael said. “As you can see from the photos, the charm is chipped off. This is deliberate because if the birth mother ever came back to reclaim the child, she would have the missing piece to establish identity. Usually this never happened, but it is heartening to know that the mother of Vincenzia did not abandon her baby with ease of heart. There was hope. There was love.

“From my visit to the archivio, I was able to view the correspondence from the priests to the hospital as well as the ledger that was kept for the payments made for the first 14 years of Vincenzia’s life and, of course, hold the precious medallion that remained quietly tucked away in the archive for me to rediscover. It is a humbling but beautiful legacy to know my family’s history is preserved in Toscana, and I got to be reunited with it.”