Prior to being reclusive, Sohrweide worked, married and had children 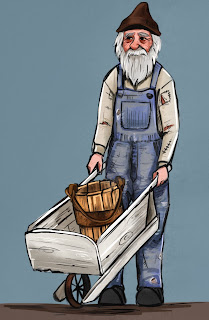 One mystery I’ve partially solved—with the help of cousin Greg, who is an extraordinary researcher—is the question of what Sohrweide’s life was like prior to purchasing his Rosedale property in 1929. The internet and sites such as Ancestry.com have helped us piece together a bit of the goat man’s history. But before we get to that, let’s look at what people living today thought about him, which is in some ways more interesting that the truth.

Maize said she understood that “he was an inventor and had notebooks full of the things he wanted to invent.”

Linda and Roger both felt he must have had an engineering background because of the ideas and drawings he had showed our grandfather.

“He had approached Grandpa with two ideas,” Linda said. “He spent a lot of time making big engineering sorts of plans. He wanted Grandpa to get somebody to listen to him, because he had a way to get more power out of Grand Coulee Dam, with engineering. He showed Grandpa the plans for it, and Grandpa said they looked like real plans, but he wouldn’t have any idea who to approach to tell them how to do that.”

However, Sohrweide’s engineering prowess did not impress everyone. Greg tells this tale: “When we were kids, one of the stories about Sohrweide was that he had a plan on how to increase the electrical power output of the Grand Coulee dam, but that nobody at the dam would listen to him. Us being kids, we thought maybe he had something on the ball. In the 1970s I asked Julius about it. He kind of scoffed with a chuckle and said that Sohrweide’s ‘plan’ was to extend the length of the turbine blades in the generators, giving the water flowing through the dam more leverage. For anyone who doesn’t get why no one at the Bonneville Power Administration would listen to Sohrweide, it would be akin to contacting NASA and telling them that the next time they launch astronauts into space, they should point the rocket up.”

“His original plan had been to buy all the property on both sides of the lagoon and put a dam at the end of it to hold the water in,” Linda said. “And then he would use the trees along the lagoon to build treehouses and make a honeymoon haven of treehouses. But he needed somebody to pitch in money to help him do that. Grandpa didn’t think that was possible, so he didn’t pitch in any money.”

“He must have had some engineering background,” Roger said. “The way I heard the story is that before the stock market crash and the depression, he had put together a syndicate of investors to develop the property into a resort. He had some equipment accumulated out there, some pumps and other metal parts for the engineering setup. Then the financial crash hit, and his investors all went bankrupt, and the plan fell apart. That’s pretty much what ruined his life. He was stuck out here with the property. He had given up his employment to start the development. And then when everything crashed, there was no employment to be had, so there was no place for him to go back to work. I have no idea what he lived on while he was up here, because there was no social security for him to live on (Social Security did not start until 1935, during the Roosevelt administration). Possibly he had some kind of pension. He certainly didn’t grow enough goats to live on.”

As our research shows, though, Sohrweide was neither an engineer nor an inventor, and he seemingly had a fairly normal life for at least his first 30 years. Then he became a bit of a drifter for the next 25 years, though he still lived in mainstream society, before he finally ended up in Rosedale—where he became a little more estranged from society each year. He spent his last seven years in a Tacoma nursing home.

Reinhard August William Sohrweide was born December 31, 1875, to August Ferdinand Friedrich Sohrweide and Alwine “Alvina” Louise Friederike Auguste Maass in 1868 in Milwaukee, Wisconsin. His parents were both born in Prussia, Germany, and immigrated to the United States in 1865 and 1867, respectively. The name Sohrweide comes from two German words: Sohr, meaning dry or withered, and weide, meadow or grassland. The census shows that other Sohrweide families already lived in Milwaukee, no doubt relatives, who would have helped August and Alvina get settled.


Raynard Raynard went by the name Reinhard until his mid-twenties, when he decided to use a more American-sounding name. He often just used his initials, R.A. He had two sisters, Emma (1870) and Martha (1879). His brother Johann, three years older, legally changed his name to John in 1902. August, Johann and Reinhard are all listed at the same address in Milwaukee in 1893. August is listed as a laborer, Reinhard as a carpenter and Johann as upholster. In 1896, the directory is the same, except Reinhard is now an upholster like his brother. The next year, Reinhard and Johann moved to Denver, Colorado, and in the 1898 Denver directory, they are sharing a room and working as upholsterers for E.C. Hartshorn. The next two years, the brothers have separate addresses but are still working for Hartshorn, and on March 20, 1901, Raymond Sohrweide married Amy Blanche Pearman. In January of 1902, Blanche (she went by her middle name) gave birth to Dorothy Mary, and in 1904 to Leroy Ambrose.Both brothers continued to work as upholsters, but in 1902, their employer was listed as the Pullman Company. By 1903, John had moved away from Denver, but Raynard continued to work for the Pullman Company through 1906, the year his father died. Shortly after that, Raynard and Amy’s seemingly normal life as a couple came to an acrimonious end. They were granted a divorce January 18, 1908. Amy took the children; Raynard left Colorado when Leroy was in grade school and they never saw each other again. Dorothy came to Gig Harbor when Raynard had to be moved to a nursing home in Tacoma. Blanche remarried in 1913 to John Fielden Oliver, and the couple gave birth to John Monroe Oliver in 1920. 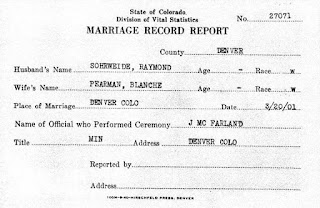 Where Raynard lived from 1908 to 1916 is not known, but in 1916, he shows up in the Seattle city directory as an upholsterer, working for the “SM&U Co.,” which is the Seattle Mattress and Upholstery Company, founded in 1882 and existing today as Seattle Mattress.

Among other things, SM&U made custom mattresses for boats, and it could have been this connection that led Raynard to future work in the fishing industry during his years in Seattle. On his 1918 draft card, he is working for the Puget Sound Bridge and Dredging Company, and in the 1919 Seattle directory, his occupation has changed to shipworker. Sometime in the 1920s, he purchased a used fishing vessel—probably a gillnetter, since the records say it had a crew of one—and lived on it. This can be surmised because on his boat registration papers for 1928 and 1931, his address is written as “care (of) 5016 W. Marginal Way,” which was the home of Edward Wislocker, a ship’s carpenter. This was also Sohrweide’s address in the 1927 Seattle directory, which again listed him as an upholster. He also spent some time in Tacoma and can be found in the 1924 Tacoma directory working as an upholsterer for the Washington Parlor Furniture Company, Inc.

When he purchased the Rosedale property in 1929, he was still living on his boat, and most likely, he piloted the boat to Rosedale and continued to live in his boat until his cabin was habitable. It’s not clear when he moved on shore. He is not listed in the 1930 Rosedale census. Dick Meyer Sr., who was born in 1931 and grew up his family’s farm, recalls seeing Sohrweide’s boat in the Rosedale lagoon.

It’s also not known whether Sohrweide built his shack or instead refurbished whatever was left over from the days when Joseph Oakes homesteaded the land. It is quite likely that any fruit trees on the land were holdovers from Oakes, as Greg Spadoni’s research showed that Oakes planted 240 fruit trees from 1884 to his death in 1890.

“It looks to me like Sohrweide might have been living in the original homesteader’s house, although it could’ve been the second house on the land,” Greg said. “If the original house still existed, it had to have been pretty dilapidated when Sohrweide bought it, because Dick Meyer told me that Sohrweide lived on a broken-down fishing boat in the lagoon until it rotted out from under him. You’d think he would’ve lived in the house if it was in decent condition, but that’s probably something else we’ll never know.”

Sohrweide is listed in the 1940 census, which also has a column that asks whether the person lived in the same place in 1935, and he was there then as well. The census also states that he had attended school through the 8th grade and his house was valued at $500.

Though he lived alone, his reclusive and suspicious nature probably did not manifest itself in his early years in Rosedale, as many of us who were children in the 1950s recall that our parents and grandparents were on friendly terms with him. Maize recalls that Raynard’s brother sometimes came to visit. And while many who knew him in his later years described him as paranoid, some of that can be attributed to the fact that people have told tales of sneaking around Sohrweide’s house when they were kids, hoping to see him without being detected. As the character Harold Finch in the 2015 movie Asylum said: “It’s not paranoia if they’re really out to get you.”

The knowledge that he had worked as an upholster as early as 1896 probably explains his income during his years in Rosedale. The Upholsters  International Union of North America was founded in 1892, and as of 1936, it was estimated that they had 11,500 members—and they had a pension fund. It is common knowledge that Sohrweide went to Gig Harbor on a regular basis—probably monthly—to cash his checks and do his shopping.

Posted by Paul and Lucy Spadoni at 2:42 PM