The story of our mysterious childhood neighbor, the recluse of Rosedale

Introduction
Giovanni Boccaccio’s “The Decameron” is a classic work of Italian literature written during times of the Black Plague in Italy. Seven young women and three men moved to the country to isolate themselves and avoid becoming infected, and during their self-imposed exile, each person had to tell the others a story a day for 10 days, and thus the book tells 100 different stories.

Because of COVID-19, I have only been able to travel to Italy once in 2020 and 2021, and like Boccaccio, I have used some of my time to reflect and write. The result is a story that is unrelated to my time spent in Italy but is, rather, a reflection on a childhood experience. I had the privilege to grow up in the Rosedale neighborhood of Gig Harbor next to a man who is now largely forgotten, but during my youth, he was the stuff of legends, a man of mystery who inspired many stories. Some stories were actually true, but others were the fantastical products of half-truths and the vivid imaginations of his neighbors.

What follows is the result of my investigations into our childhood neighbor, Mr. Raynard Sohrweide.

The Old Goat Man of Rosedale

A fine line separates the weary recluse from the fearful hermit. Finer still is the line between hermit and bitter misanthrope. Dean Koontz

Silas Marner is the tale of an outsider recluse in England who was regarded with curiosity and suspicion by his neighbors. I read this novel by George Eliot during high school. Having grown up in a rural Gig Harbor Peninsula neighborhood next to a similar man, I didn’t appreciate how rare it was to encounter a true hermit.

We called him Mr. Shorewidey, or “the old goat man,” though by the time I was old enough to meet him, his goats were gone, replaced for a time by dogs. I have little to no recollection of the dogs, either; they didn’t last long. Mr. Sohrweide—his true last name—spent his final years next to Spadoni Hill in Rosedale living in nearly utter seclusion.

To me and the many cousins who grew up as my neighbors, Sohrweide was a man of mystery. I encountered him only a few times. Some of my neighbors and cousins can’t even recall meeting him, yet he somehow made a deep impression.

Dick Meyer Jr, with whom I grew up playing youth league and high school baseball, lived on a farm just north of Sohrweide.

“He was a legend of mythic proportions in our house,” Dick said of Sohrweide. “I have no memory of actually meeting him. But I do remember always running anytime we passed the trail that led to his house in the event he would see us and take us up the hill, and we would never be seen or heard from again. My dad really enjoyed playing on our imaginations.”

My sister Linda, eight years older than I, remembers Sohrweide and his goats. One of the goats head-butted her to the ground, resulting in a childhood fear of goats—though as an adult Linda farmed goats herself, so the fear was not permanent.

“He wasn’t friendly to us,” she said. “We were all scared of him because the reputation was that if you came on his property, he would shoot you with a shotgun. But we never went over there. We’d dare each other to go further down the trail and further down the trail, but if we heard a noise, we’d run back. We didn’t know if he’d actually shoot people with a shotgun.”

Cousin Dave Langhelm grew up on property at the head of the Rosedale lagoon that shared a border with Sohrweide on the south. The family moved there in 1949. “As a kid, I was terrified of him,” Dave said. “I can’t remember meeting him, but we used to play around in the woods near his property, and sometimes we went on it. It stunk highly of goats around his house. We considered it a great feat to go on his land without being caught and yelled at.”

The story of sneaking around the edges of Sohrweide’s property was repeated by several childhood friends and neighbors.

“I never talked to Mr. Sohrweide, but he was source of great excitement,” said Darlene Elford Kiefer, who grew up on Spadoni Hill. “We never saw him, but we used to sneak as close to his cabin as we could and watch for him. We believed that he had a rifle and would shoot us. I remember one time looking around his cabin, but the only thing that stuck in my mind is that he had little packets that you added to butter to make it yellow.”

Darlene’s sister Maize (known as Patty when younger) Elford recalls being unafraid of Sohrweide, but she agrees that he was enigmatic. “Mr. Sohrweide was a mysterious character to us,” she said. “We were fascinated by him and wanted to know more about him. Now and then we would see him walking down the road past our homes. His persona was gentle; he was not threatening.”

Jim Langhelm, Dave’s older brother, said, “We kids were scared of him and never went on his land, and I don’t remember ever talking to him. My only contact with him was on the occasion that I was in the car when dad gave him a ride when he came upon him walking on the road. I also remembered that he ‘witched’ the spot in the back yard where dad and I dug the well we used for several years. I was around 10 when we dug it.”

How did Sohrweide come to live on his wooded 50 acres? What was he like? What was his source of income? His past? Did he have family somewhere? What drove him into seclusion?

For Silas Marner, the betrayal of his business partner, who stole Marner’s fiancé and framed Marner for embezzlement, drove him into seclusion. He worked alone on the edge of a rock pit, weaving cloth for sustenance.

The questionable sound of Silas’s loom, so unlike the natural cheerful trotting of the winnowing-machine, or the simpler rhythm of the flail, had a half-fearful fascination for the Raveloe boys, who would often leave off their nutting or birds’-nesting to peep in at the window of the stone cottage, counterbalancing a certain awe at the mysterious action of the loom, by a pleasant sense of scornful superiority, drawn from the mockery of its alternating noises, along with the bent, tread-mill attitude of the weaver. But sometimes it happened that Marner, pausing to adjust an irregularity in his thread, became aware of the small scoundrels, and, though chary of his time, he liked their intrusion so ill that he would descend from his loom, and, opening the door, would fix on them a gaze that was always enough to make them take to their legs in terror. Nobody in this world but himself knew that he was the same Silas Marner who had once loved his fellow with tender love, and trusted in an unseen goodness. Even to himself that past experience had become dim. 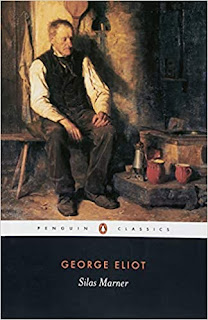 Silas Marner eventually rejoined society, but Sohrweide, who apparently had a fairly normal childhood and young adulthood, gradually became more reclusive as the years went by. None of those of us living now who grew up next to Sohrweide really knew much about his past. We can recall bits and pieces of stories told here and there. Some of what we believe is accurate, but much is not, as I have discovered.

Posted by Paul and Lucy Spadoni at 7:08 AM